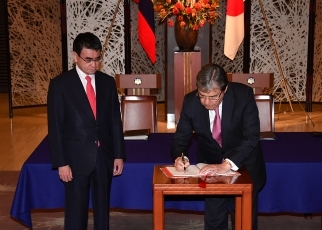 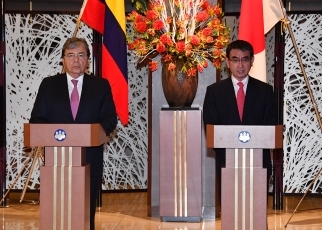 Prior to the Foreign Ministers’ Meeting, a ceremony for the signing of the Japan-Colombia Tax Convention by the two ministers was held.

1. At the beginning, Minister Kono welcomed Minister Trujillo’s visit to Japan, and stated that it is a great pleasure to welcome Minister Trujillo to Japan, drawing an end to the celebrations of this year’s 110th anniversary of Japan-Colombia diplomatic relations. Minister Kono also stated that Colombia is an important partner which shares fundamental values with Japan, and that Japan seeks to further develop their friendly relationship. In response, Minister Trujillo stated that it is an honor to visit Japan and that signing of the Tax Convention is a step forward for the economic relation betwenn Japan and Colombia.

2. Minister Kono stated that over 90 Japanese companies are currently carrying out business in Colombia, and welcomed the tax convention just signed by the ministers, noting that it would further promote investments and economic exchanges between the two countries. The two ministers also touched upon the Trans-Pacific Partnership (TPP11) Agreement and the Economic Partnership Agreement (EPA) being negotiated between Japan and Colombia, and shared the view on the importance of promoting economic collaboration between the two countries.

3. Minister Kono informed that Japan has decided to introduce multiple entry visa for Colombian nationals, and expressed this expectation that this would contribute to invigorating people-to-people exchanges between the two countries.

4. In addition to the bilateral relationship, the two ministers also exchanged views regarding cooperating in the international arena and regional affairs such as the North Korea issue and the situation in Venezuela, including assistance for displaced Venezuelan citizen. The two ministers shared the view on deepening the Japan-Colombia cooperative relationship.