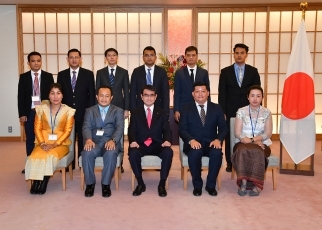 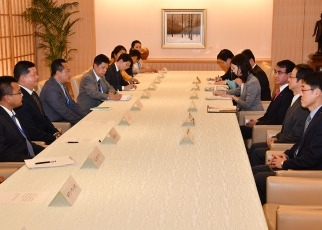 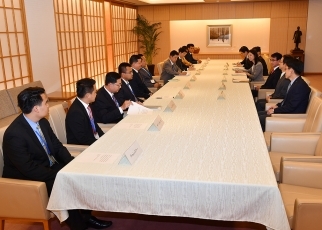 On December 3, Mr. Taro Kono, Minister for Foreign Affairs, received a courtesy call commencing at 5:55 p.m. for apporoximately 20 minutes from ten young politics-oriented Cambodians (the eldest participant as the representative; Mr. Som Piseth, Deputy Govonor of Kep Province), who were visiting Japan as a part of the JENESYS (Japan-East Asia Network of Exchange for Students and Youths) program 2018. The overview of the courtesy call is as follows.

1. At the beginning, Minister Kono expressd his pleasure to see prompt realization of the invitation program which was announced by Prime Minister of Japan in the bilateral Summit Meeting last October. Stating that Japan has been working closely with Cambodia to support its democratic development thus far, Mr. Kono encouraged the participants to advance democratization of their own country as young generation who is expected to formulate the future of Cambodia, and, to this end, to utilize their experience of various aspects of Japan.

2. Furthermore, Mr. Kono noted that Japan achieved a peaceful and affluent society after the war because it had placed great importance on and had cultivated universal values such as freedom, democracy, fundamental human rights, and rule of law. Then he placed his hopes on the participants by urging them to unite across political affiliations for the development of the nation through promoting democratic process in the country.

3. In response, Deputy Govorner Som Piseth expressed his appreciation for the invitation to the program as well as Japan’s assistance to Cambodia over years. Other participants also expressed their gratitude to see and hear Japanese democratic process at first hand and showed their determination to take lessons from Japan’s experience and cooperate among the young generation for the democratic development of Cambodia.