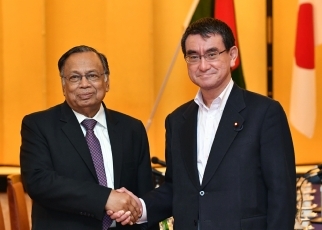 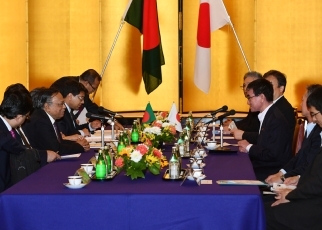 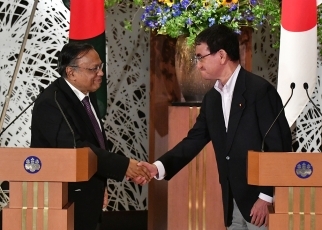 On May 14, from 7:25 p.m. for an hour and forty minutes, Mr. Taro Kono, Minister for Foreign Affairs, held a Japan-Bangladesh Foreign Ministers’ Meeting and working dinner at Iikura Guest House with H.E. Mr. Abul Hassan Mahmood Ali，Foreign Minister of the People’s Republic of Bangladesh who was making a working visit to Japan upon invitation by the Ministry of Foreign Affairs of Japan. The overview is as follows.

1. Minister Kono welcomed the visit of Minister Ali to Japan, stated that Japan will further promote the Japan-Bangladesh Comprehensive Partnership and continue to fully support Bangladesh’s development on all fronts so that the country can attain “newly industrialized economy” status by 2021, through the 39th Yen Loan Package (total 200.4 billion yen). In addition, Minister Kono explained that Japan will further strengthen the bilateral relations towards the 50th anniversary of diplomatic relations in 2022 and requested the Government of Bangladesh to continue to secure the safety of Japanese people.

In response, Minister Ali expressed his appreciation for the invitation, showed gratitude to Japan’s assistance for the nation-building of Bangladesh and explained that Bangladesh will continue to make efforts to further develop the bilateral relationship.

2. Minister Kono highly commended the efforts made by the Government of Bangladesh in accepting displaced persons from the Rakhaine State of Myanmar and the ongoing dialogue with the Government of Myanmar. He further stated that, considering the increasing risk of natural disaster in the camp during the rainy season, steady and early repatriation in a "safe, voluntary and dignified" manner would be the key and explained about Japan's activities to improve the resettlement environment on the side of Myanmar. In addition, Minister Kono expressed Japan's readiness to encourage the cooperation between Bangladesh and Myanmar and to continue to extend necessary support to Bangladesh with a view to realizing repatriation based on the agreement. In response, Minister Ali explained about humanitarian efforts by Bangladesh and the progress in dialogue with the Government of Myanmar toward the early repatriation of displaced persons. He further expressed his gratitude for Japan's continuous support. Both Ministers agreed to continue to work closely together on this matter.