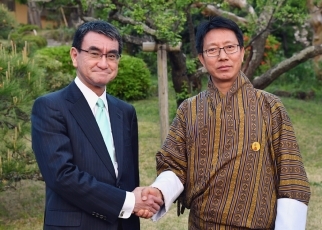 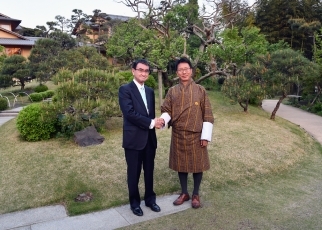 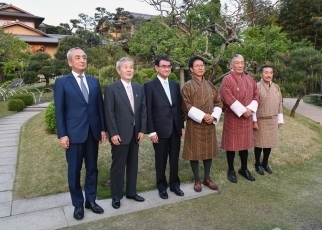 On April 13, from 6:15 p.m. for two hours and ten minutes, Mr. Taro Kono, Minister for Foreign Affairs, held a Japan-Bhutan Foreign Ministers’ Meeting and working dinner at the Former Residence of YOSHIDA Shigeru in Oiso town, Kanagawa Prefecture with H.E. Mr. Damcho Dorji, Minister of Foreign Affairs of Bhutan, who was accompanying H.E. Dasho Tshering Tobgay, Prime Minister of Bhutan on his visit to Japan. The overview is as follows. Note that Prime Minister Tobgay also attended the working dinner.

1. Minister Kono welcomed Foreign Minister Dorji’s visit to Japan and Oiso, the host town of Bhutan in the Tokyo 2020 Olympic and Paralympic Games. He wished success of athletes from Bhutan at the Tokyo Olympics and Paralympics, and stated that he hoped to strengthen the bilateral relations between Japan and Bhutan. In response, Foreign Minister Dorji stated that he was grateful for Japan’s welcome and that he was pleased to meet at the historical site of Former Residence of YOSHIDA Shigeru. He stated that the ongoing visit of Prime Minister Tobgay, particularly the summit meeting, had been fulfilling.

2. Referring to the good relations between Japan and Bhutan resulting from the mutual visits by members of the Imperial Family of Japan and the Royal Family of Bhutan and the outcomes of Japan’s support for Bhutan since the dispatch of the late agricultural expert Mr. Keiji Nishioka in 1964, Minister Kono stated that Japan would continue to support the socioeconomic development of Bhutan based on the 12th Five Year Plan to be implemented in Bhutan, and said that Japan was considering dispatching more JICA volunteers. Furthermore, he welcomed the increase in the number of Bhutanese students studying Japanese, and showed his intention to facilitate their stay in Japan and to revitalize sports exchanges. In response, Foreign Minister Dorji stated that Dasho Nishioka, who had worked hard to develop the agriculture of Bhutan, remained in the heart of the Bhutanese people. He further stated that bilateral exchanges had been good, including the ones between the Imperial Family and the Royal Family, the recent visit to Japan of Prime Minister Tobgay, and expressed his gratitude for Japan’s support to date. He further expressed his hope for Japan’s support to the 12th Five Year Plan aiming at Bhutan’s graduation from least developed county (LDC) status, and stated that he would support Bhutanese students going to Japan, and that he intended to cooperate with Japan.

3. The two ministers held an exchange of views regarding international issues and regional situations. In particular, they held candid discussions towards resolution of the North Korean issues based on the recent discussions at the summit meeting. Furthermore, the Bhutanese side expressed its expectations regarding the role of Japan for the peace and stability of the international community, and declared that Bhutan would support Japan’s becoming a permanent member of the United Nations Security Council. Minister Kono showed his gratitude to Bhutan’s support, and said that he hoped to cooperate with Bhutan towards realization of reform of the United Nations.

The Former Residence of YOSHIDA Shigeru is where former Prime Minister Shigeru Yoshida lived in from 1945 until the end of his life in 1967. During his lifetime, many VIPs from Japan and overseas visited the residence, including Their Majesties the present Emperor and Empress of Japan and then Chancellor of West Germany Konrad Adenauer, etc. After former Prime Minister Yoshida passed away, then Prime Minister Masayoshi Ohira and U.S. President Jimmy Carter held a Japan-U.S. Summit Meeting at the residence in 1979.