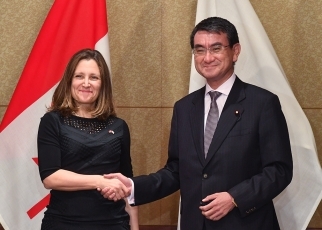 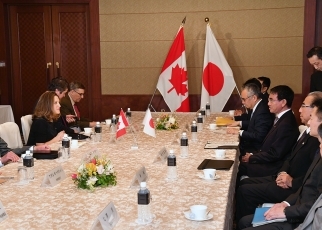 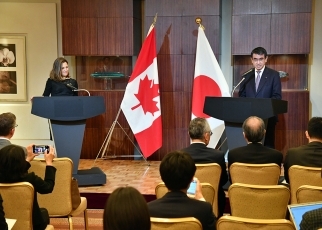 On March 27, commencing at 8:10 p.m. for approximately one and a half hours, Mr. Taro Kono, Minister for Foreign Affairs, held a meeting and working dinner with the Honourable Chrystia Freeland, Minister of Foreign Affairs of Canada, who is making an official working visit to Japan. The overview is as follows.

1. The two ministers held a discussion on the G7, and confirmed they will coordinate in order to send a strong message on various challenges, including the issue regarding North Korea at the G7 Foreign Ministers’ Meeting in Toronto in April and the G7 Summit in Charlevoix, Quebec, in June this year.

2. As for the issue regarding North Korea, the two ministers shared the view that amid moves to realize inter-Korean and United States-North Korea summit meetings, they will continue to apply maximum pressure campaign to North Korea, including through fully implementing the relevant United Nations Security Council (UNSC) resolutions, in order to bring about North Korea’s dismantlement of nuclear and missile programs in complete, verifiable and irreversible manner. Furthermore, the two sides shared the view that they will cooperate to deal with North Korea’s attempts to evade sanctions, including addressing “ship-to-ship transfers,” in order to ensure the effectiveness of the UNSC resolutions. Minister Kono also requested understanding and cooperation for early resolution of the abductions issue, for which Minister Freeland expressed her support.

3. Furthermore, the two ministers welcomed the 90th anniversary of the establishment of the diplomatic relations between Japan and Canada this year, while reaffirming that they will continue to deepen the bilateral relationship in a broad range of fields, including security and economy. On that basis, they shared the view that the Japan-Canada Acquisition and Cross-servicing Agreement (ACSA) will be signed as soon as possible, and that a Japan-Canada vice minister-level “2 plus 2” dialogue on foreign and defense affairs will be held at an early date. They also confirmed that a Japan-Canada Joint Economic Committee will be held in June this year.

4. In addition, the two ministers exchanged views on trade issues, including the Trans-Pacific Partnership (TPP) 11, and on challenges in the regional and international communities.