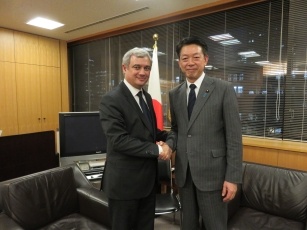 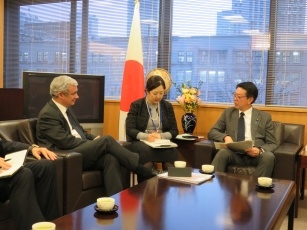 On February 8, commencing at 5 p.m. for approximately 40 minutes, Mr. Yoji Muto, State Minister for Foreign Affairs received a courtesy call from Mr. Pedro Silva Pereira, Standing Rapporteur for Japan, International Trade Committee, European Parliament, who is visiting Japan upon the invitation by the Japanese Government, and exchanged views on issues of common interest such as strengthening Japan-EU economic ties, with particular reference to the Japan-EU Economic Partnership Agreement (EPA). The meeting summary is as follow:

1. At the beginning, State Minister Muto welcomed Mr. Silva Pereira’s visit to Japan, and stated that the Government of Japan intends to achieve agreement in principle on the Japan-EU EPA at the earliest possible time in 2016 with a view to further strengthening the strategic bilateral relations between Japan and the EU.

2. In response, Mr. Silva Pereira, expressing his gratitude for the invitation, stated that the Japan-EU EPA is an important instrument to further strengthen the bilateral relations between Japan and the EU and that he would like to work together towards early conclusion of the EPA negotiations.

3. In addition, State Minister Muto and Mr. Silva Pereira exchanged views on a variety of other bilateral issues.