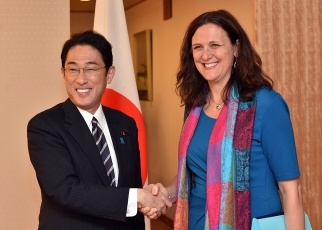 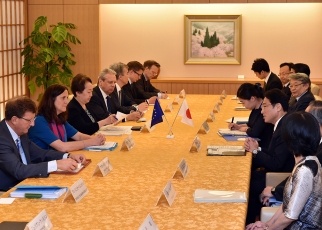 On Wednesday, May 27, for 35 minutes from 17:30, Mr. Fumio Kishida, Minister for Foreign Affairs met with Ms. Cecilia Malmtröm, European Commissioner for Trade, on the occasion of the Commissioner’s visit to Japan to attend the 23rd Japan-EU Summit Meeting which is scheduled to be held on May 29. The overview of the meeting is as follows.

1. Regarding the Japan-EU Economic Partnership Agreement (EPA), Minister Kishida stated that it is important to further accelerate the negotiations, aiming at reaching agreement in principle during this year, while attaching importance to both speed and quality. In response, Commissioner Malmström stated that in order to conclude the agreement during this year, it is necessary to considerably accelerate the negotiation process. Both sides concurred on instructing their negotiating teams to further accelerate their work.

2. Furthermore, Minister Kishida requested easing and lifting of the EU’s import restrictions on food from Japan, including those from Fukushima, on a scientific basis. In response, Commissioner Malmström noted that the review of the restrictions is currently under consideration inside the EU.