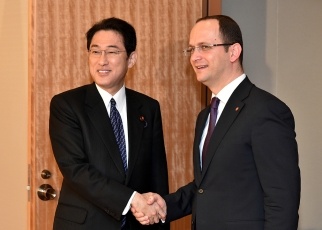 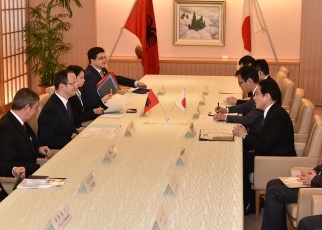 On April 6, commencing at 11:15 a.m. for approximately 30 minutes, Mr. Fumio Kishida, Minister for Foreign Affairs of Japan, held a meeting with H.E. Mr. Ditmir Bushati, Minister of Foreign Affairs of the Republic of Albania, in Tokyo. The overview of the meeting is as follows.

1. At the beginning, welcoming Minister Bushati’s first visit to Japan, Minister Kishida expressed his hope that this visit will advance Japan-Albania relations. He also conveyed his condolences to those who are affected by the flood in Albania in February this year, with the expectation that Japan’s emergency assistance has been of any help to the affected people.
In response, Minister Bushati expressed his gratitude for Japan’s assistance.

2. Japan-Albania relations
Minister Kishida welcomed the frequent mutual high-level visits in the last few years. Emphasizing that Japan gives great attention to the EU membership process of Albania and other Western Balkan countries, he also stated that Japan will continue to provide assistance for domestic reforms and economic development of each country in the region.
Minister Bushati appreciated that Japan decided to implement the Non-Project Grant Aid for Provision of Japanese Next Generation Eco-Friendly Vehicles, which will promote Albania’s environmental conservation efforts.
Both ministers shared the view that Japan and Albania will further strengthen the cooperative relationship as an important partner both in the context of bilateral relations and the international community.