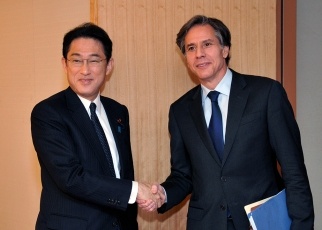 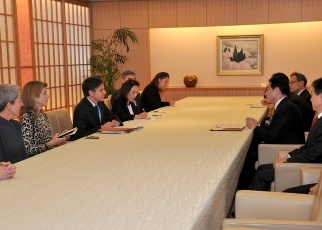 On February 13, commencing at 10:50 a.m. for approximately 40 minutes, Mr. Fumio Kishida, Minister for Foreign Affairs, received a courtesy call from Mr. Tony Blinken, Deputy Secretary of State of the United States, during his visit to Japan. The overview is as follows.

1. Both sides valued that Japan and the United States are working closely together on challenges of the Asia-Pacific region and the world, and reaffirmed the importance of bilateral cooperation. Both sides shared the recognition that they will cooperate for the success of Prime Minister Shinzo Abe’s official visit to the United States this year.

2. Furthermore, Minister Kishida expressed his condolences over the death of U.S. national Kayla Mueller, who was captured by ISIL, and his appreciation for the United States’ cooperation and solidarity in connection with the murder of the Japanese hostages. He further explained that Japan will never succumb to terrorism, and will coordinate closely with the international community.