Third Meeting of the “Panel of Experts on Strengthening Sport Diplomacy” 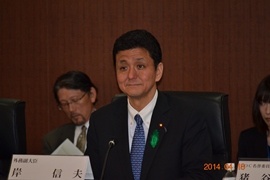 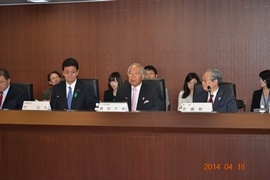 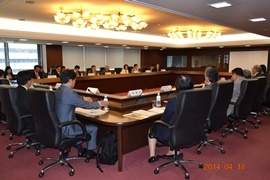 On April 18, commencing at 10:30 a.m. for approximately 90 minutes, the third meeting of the “Panel of Experts on Strengthening Sport Diplomacy” was held at the Ministry of Foreign Affairs. An overview of the meeting is as follows:

1. At the beginning, Parliamentary Senior Vice-Minister for Foreign Affairs Nobuo Kishi touched on the roles sport fulfills in peace-building, in connection with the third meeting’s theme of “sport and peace,” and said he hopes the panel will discuss measures that should be addressed through Japan’s foreign diplomacy in the future, in order to achieve peace through sport.

2. Following that, Chiharu Igaya, Honorary Member of the International Olympic Committee (IOC), gave a presentation on the IOC’s initiatives in regard to sport and peace, and introduced the connection between the hosting of Olympic and Paralympic Games and the political climate, and the historical background to the IOC’s initiatives. Mr. Igaya indicated that contributing to the peace movement could be cited as one issue that should be considered in the run-up to 2020. Following Mr. Igaya, Yasuhiro Yamashita, Executive Director, NPO “Solidarity of International Judo Education” and Vice President, All Japan Judo Federation spoke on the theme of “International exchanges via sport - Judo, friendship and peace –” and introduced international exchanges being undertaken by the NPO in regions worldwide via judo instruction. As an example he pointed out that by harnessing the power that sport possesses, activities in Israel and Palestine have opened up valuable opportunities for deepening mutual understanding.

3. During the discussion, the panel members mentioned successful examples of international exchange events via sport that targeted young people in particular, and it was also pointed out that the mindset of fair play in sport fulfills a role in enhancing awareness of peace. Additionally, awareness of the need to have Japanese athletes contribute appropriately to various activities in order to make an international contribution and to positively utilize the influence that athletes possess was also raised as an issue.

4. Furthermore, the opinion was presented that in view of the 2020 Olympic and Paralympic Games in Tokyo, measures that utilize the Sport for Tomorrow framework and cover regions worldwide should be actively developed while coordinating with countries’ Olympic and Paralympic committees and sports federations.

(* The foregoing is a provisional translation. The above date denotes the date of the issue of the original press release in Japanese.)
Page Top
Back to Press Releases