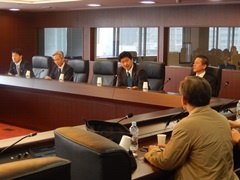 On March 28, commencing at 9:15 a.m. for approximately 30 minutes, Parliamentary Vice-Minister for Foreign Affairs Seiji Kihara received a courtesy call from Japanese, Chinese, and ROK journalists participating in the Japan-China-ROK Trilateral Journalist Exchange Program. An overview of the courtesy call is as follows:

1. Parliamentary Vice-Minister Kihara welcomed the visit to Japan by the delegation. He stated that Japan, China, and the Republic of Korea (ROK) have a wide range of areas in which the three countries can cooperate in a future-oriented manner, and that the three countries have an inseparable relationship. He noted on the importance of forging trust through trilateral people-to-people exchanges. He hoped that mutual understanding among the journalists from the three countries would deepen through this journalist exchange program, and that this effect will also expand to the people in the three countries through information disseminated by the participating journalists.

2. In response, the delegation asked questions regarding the Japan-China-ROK trilateral relationship and the recent situation in East Asia, among other matters, and a lively exchange of views took place.