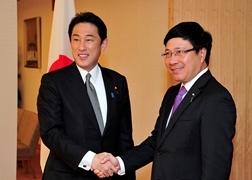 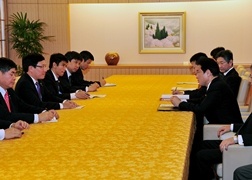 1. Minister Kishida welcomed that the bilateral cooperation in various fields has been dramatically strengthened last year, which marked the Japan-Viet Nam Friendship Year (the 40th anniversary of the establishment of diplomatic relationship between Japan and Viet Nam), by mutual high level visits including those of Prime Minister Shinzo Abe and Mr. Nguyen Tan Dung, Prime Minister of Viet Nam. He also stated his hope that President Sang’s visit to Japan would help further develop the Japan-Viet Nam relationship.

2. Deputy Prime Minister Minh stated that he would like to elevate the Strategic Partnership between Japan and Viet Nam to a higher level and strengthen cooperation in multilateral fora, by taking advantage of President Sang’s visit to Japan.