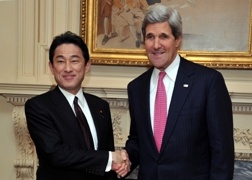 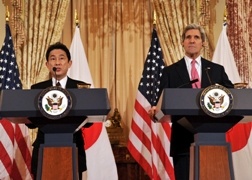 On February 7, from 11:30 a.m. for approximately one hour, Mr. Fumio Kishida, Minister for Foreign Affairs of Japan, held a meeting with the Honorable John Kerry, Secretary of State of the United States during his visit to Washington D.C. An outline of the meeting is as follows:

At the beginning, Secretary Kerry welcomed Foreign Minister Kishida’s visit to the United States. In response, Minister Kishida stated that a number of achievements in Japan-U.S. relations have been made since the Abe administration started, including the progress in the relocation of the U.S. Marine Corps' Air Station Futenma, the start of Trans-Pacific Partnership (TPP) negotiations, Japan's accession to the Hague Convention on the Civil Aspects of International Child Abduction and promotion of youth exchanges under the KAKEHASHI Project -The Bridge for Tomorrow-. Minister Kishida also mentioned the historical meeting of the Japan-U.S. Security Consultative Committee ("2+2") where the four ministers and secretaries gathered in Tokyo for the first time. Minister Kishida said he would like to discuss a broad range of issues, including Japan’s initiatives based on the policy of "Proactive Contribution to Peace," security cooperation, Asia-Pacific regional affairs, including collaboration in dealing with North Korea, and global challenges. He said he would like to confirm how to strengthen the bilateral alliance through such discussion.

Minister Kishida said Japan would like to welcome U.S. President Barack Obama to Japan as a State Guest. Minister Kishida also stated that on the occasion of the President’s visit, Japan hopes the leaders of the two countries will reaffirm their strong bilateral alliance, based on the outcomes of past Japan-U.S. cooperation and launch further specific cooperation.

(a) Minister Kishida explained that the Abe administration is promoting the policy of "Proactive Contribution to Peace" based on the principle of international cooperation and said Japan is willing to work with the United States on this matter. Minister Kishida said the specific agenda he mentioned at the recent Munich Security Conference (the Geneva II Conference on Syria, assistance to Palestinians, and support for the integration of the Association of Southeast Asian Nations (ASEAN), among others) are symbols of Japan-U.S. cooperation, adding that he expects the United States’ continued support toward such initiatives. Furthermore, Minister Kishida explained how Japan has been steadily implementing its security policies, and his hopes to appeal the strong Japan-U.S. alliance at home and abroad, giving both countries have a historic opportunity to take major steps forward in a broad range of security and defense cooperation, including the planned revision of the Guidelines for Japan-U.S. Defense Cooperation.

(b) Minister Kishida said the approval by Mr. Hiroshi Nakaima, Governor of Okinawa Prefecture, of the landfill of Henoko for the relocation of the Futenma air station was a big step. Minister Kishida added that taking in view of the enactment of the National Defense Authorization Act in the United States, he welcomes progress in the realignment of the U.S. military and appreciates the cooperation by the United States. Minister Kishida stated that Japan is determined to steadily move forward the process and projects for the Futenma relocation to Henoko. He explained the requests from Governor Nakaima and asked for further cooperation of the United States to reduce the burden on Okinawa. Secretary Kerry also welcomed the approval by Governor Nakaima of the landfill of Henoko.

(c) Minister Kishida stated that he welcomes the First Round of Consultations on the Agreement to Supplement the Japan-U.S. Status of Forces Agreement (SOFA) on Environmental Stewardship which will be held on February 11th, and that Japan is willing to work with the United States for an early conclusion of the agreement.

Minister Kishida said the TPP is important for the Japan-U.S. alliance as well as from a strategic standpoint, and welcomed the eagerness shown by President Obama in his State of the Union address to conclude the TPP negotiations. Minister Kishida also stated that it is necessary for both Japan and the United States to show flexibility in order to achieve an early conclusion of the TPP negotiations.

(a) Minister Kishida and Secretary Kerry exchanged views on the recent situation regarding North Korea. Minister Kishida pointed out that while North Korea is bringing about dialogue with the ROK and other countries, there is no sign at all that it is moving toward denuclearization. He said China’s involvement remains important that the policy of exerting pressure on North Korea should be maintained, for which trilateral cooperation among Japan, the United States and the Republic of Korea (ROK) is important. Minister Kishida said Japan is willing to work closely with the United States on matters including a U.S.-ROK joint military exercise planned to take place in late February.

Minister Kishida said that although the current state of Japan-ROK relations is regrettable, Japan is willing to improve the situation by further promoting pragmatic cooperation. In response, Secretary Kerry said the United States places great value on the improvement of the Japan-ROK relations, adding that Minister Kishida's explanations are very helpful for him as he is scheduled to visit the ROK.

(a) Minister Kishida stated that while there is no change in the broad direction of Japan's policy of pursuing a Mutually Beneficial Relationship Based on Common Strategic Interests with China, Japan will take a calm but resolute approach to any attempts by China to change the status quo by force in the region including the Senkaku Islands and the South China Sea. He also said that these are common concerns for the region, and that the robust Japan-U.S. alliance and a strong U.S. commitment to Asia continue to be important. Secretary Kerry said the United States will remain committed to uphold the treaty obligations with Japan, including with respect to the East China Sea.

(b) Minister Kishida and Secretary Kerry reaffirmed their position that Japan and the United States do not accept China's declaration of the establishment of the Air Defense Identification Zone (ADIZ) and that any action that threatens the safety of civil aviation would be totally unacceptable. Considering the possibility of China expanding its ADIZ to other areas, both sides concurred to working with other countries concerned.