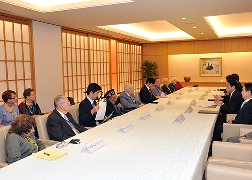 On October 15, commencing at 10:45 a.m. for approximately 20 minutes, a total of 13 people, consisting of former prisoners of war (POWs) of the United States, widows of POWs, and their caregivers paid a courtesy call on Minister for Foreign Affairs Fumio Kishida. The group is visiting Japan upon the invitation from the Ministry of Foreign Affairs. The overview of the meeting is as follows.

1. Foreign Minister Kishida expressed appreciation to the visitors for accepting the Government of Japan’s invitation, and for traveling a long distance to Japan. He commented that he hopes that this invitation would encourage a further reconciliation of minds for the visitors with regard to Japan.

2. In response, Mr.Robert Heer, on behalf of the group, stated that he was impressed by the beauty of Japan since his arrival, and conveyed his appreciation for the invitation from the Government of Japan.

3. Furthermore, Foreign Minister Kishida expressed his hope that this trip would be a fruitful one, and would be a good memory for the visitors. The courtesy call thus took place in a congenial atmosphere.