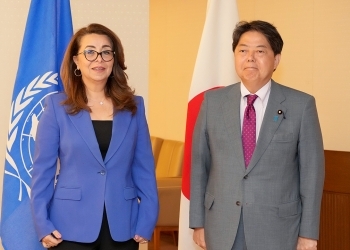 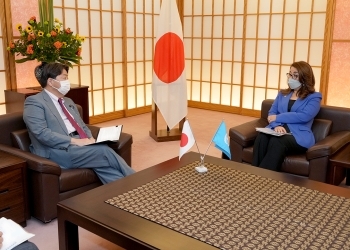 On July 25, commencing at 10:40 a.m., Mr. HAYASHI Yoshimasa, Minister for Foreign Affairs of Japan, received a courtesy call from Ms. Ghada Waly, Executive Director of the United Nations Office on Drugs and Crime (UNODC), who is visiting Japan upon invitation by the Ministry of Foreign Affairs of Japan, for approximately 25 minutes. The overview of the meeting is as follows.

[Reference 1] United Nations Office on Drugs and Crime (UNODC)
UNODC was established in 1997 as a result of the merging of the United Nations International Drug Control Programme and the Crime Prevention and Criminal Justice Programme. Headquartered in Vienna, UNODC carries out research and analyses on illegal drugs and crime, helps countries with the conclusion and execution of conventions related to crime and narcotic drugs and with the development of domestic legislation, and provides technical cooperation for capacity building in countering organized crime and terrorism.