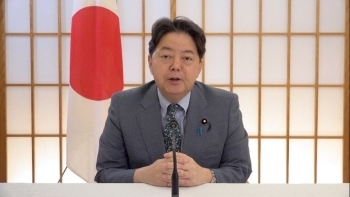 On 20th June, Three Seas Summit was held in Riga, the Republic of Latvia. Mr. HAYASHI Yoshimasa, Minister for Foreign Affairs of Japan, delivered a video message at the event on behalf of the Government of Japan.

Minister HAYASHI stated in the message that bolstering regional cohesion and connectivity across the Baltic states and Central and Eastern Europe has been a pressing issue especially now in the face of Russia’s aggression against Ukraine, and thus, the Three Seas Initiative is now more significant than ever. He reiterated that Japan is keen to step up its engagement with this Initiative.

Minister HAYASHI also mentioned that Japanese companies can contribute, with their cutting-edge technologies and expertise, to strengthening connectivity and developing infrastructure in the areas of energy, transport and digitalization, where the Three Seas Initiative focuses on. He also stated the Government of Japan is ready to encourage Japanese companies to participate actively in projects under this Initiative.

Furthermore, Minister HAYASHI stated that with the awareness that the security of Europe and Indo-Pacific is inseparable, Japan remains determined to confront the current situation in Europe together with its like-minded partners in the region, and Japan is committed to working actively with the members of the Three Seas Initiative to enhance their resilience and prosperity.