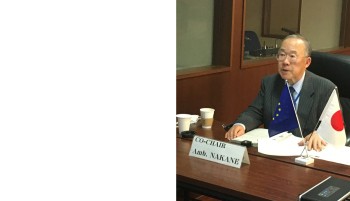 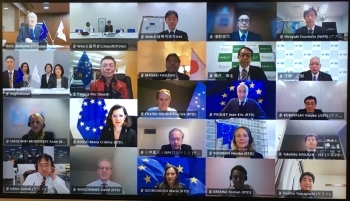 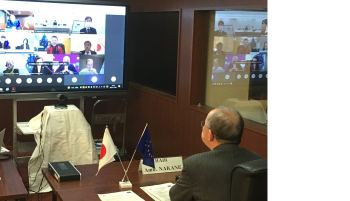 The sixth meeting of the Japan – the European Union Joint Committee on Cooperation in Science and Technology took place online on November 30th, 2021. The Summary of the meeting is as follows.

H.E. Mr. NAKANE Takeshi, Ambassador for Science and Technology Cooperation of the Ministry of Foreign Affairs of Japan and Mr. Jean-Eric PAQUET, Director-General of the Directorate General for Research and Innovation of the European Commission co-chaired the sixth meeting of the Japan-EU Joint Committee on Scientific and Technological Cooperation, organised under the Japan-EU Science and Technology Cooperation Agreement, which entered into force on 29 March 2011 and both sides welcomed its 10th anniversary.

The meeting was attended by Ambassadors of Japan to the EU and the EU to Japan, representatives of Ministries and Agencies concerned from Japan as well as officials from the European Commission services and Member States representatives.

Co-chairs noted that research and innovation are among the key areas of cooperation between Japan and the European Union and recalled their strategic importance, demonstrated by the Annex of Joint Statement of the 27th Japan-EU Summit in May 2021. Each side explained the development of the 6th Science, Technology and Innovation Basic Plan (2021-2025), ‘Communication on the Global Approach to Research and Innovation, Europe's strategy for international cooperation in a changing world’ and Horizon Europe 2021-2027 respectively, all of which adopted in 2021.

Both sides discussed present activities, new initiatives and the ways to strengthen multilateral and thematic cooperation in the areas of fundamental research and innovation values and principles including Research Integrity, Ethics and Open Science, climate change and green energy, Green Alliance, arctic research, automated and connected driving, the linkage between Horizon Europe Missions, focusing on Soil Mission, and Moonshot Research and Development Program, foresight and boosting bilateral cooperation on fusion research for DEMO.

Both sides noted the importance of using bilateral discussion that we work strongly at multilateral level, citing the G7, the International Bioeconomy Forum and its working groups, as well as Mission Innovation, and also noted that under Horizon Europe the Connected Cooperative Automated Mobility -CCAM topics international cooperation is encouraged, in particular with projects or partners from Japan.

Both sides also discussed future opportunities of further collaborations on biofuels and Japan presented quantum technology, and both sides identified the opportunity that the National Institute of Science and Technology Policy (NISTEP) and Joint Research Centre (JRC) could start discussion on possible collaboration on foresight activities, while taking note on the ongoing successful cooperation between the JRC and the National Institute of Advanced Industrial Science and Technology(AIST), in the frame of the Research Framework Arrangement (RFA) signed in 2017.

Both sides explored how Japan and the EU can enhance their cooperation given the priorities set out in the Agreement between the Government of Japan and the European Union on Cooperation in Science and Technology. Both sides reconfirmed their intention to work together for the further development of cooperation.

Concerning the framework conditions for cooperation, both sides noted the opportunities provided following the signature of three Implementing Arrangements, which allow researchers funded by the Japan Society for the Promotion of Science (JSPS), Japan Science and Technology Agency (JST) and Japan Agency for Medical Research and Development (AMED) to connect with the teams of researchers in Europe supported by the European Research Council (ERC). Besides the above-mentioned Implementing Arrangements, further cooperation between organizations such as AIST, New Energy and Industrial Technology Development Organization (NEDO) and EU’s Joint Research Centre is considered as important for the EU-Japan collaboration. In addition, both sides discussed the framework of human capital development and frontier research and modalities of cooperation. The EU explained the close cooperation mechanism of Association to Horizon Europe that is available for Japan and encouraged further discussions.

Both sides agreed to hold the next Joint Committee Meeting in Brussel in 2023. The date will be coordinated through diplomatic channels.