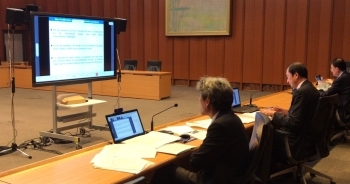 Ministry of Foreign Affairs of Japan hosted the 16th Asia Senior-Level Talks on Non-Proliferation (ASTOP) on December 9 and 10 via teleconference. Senior government officials in charge of non-proliferation policies from the ten ASEAN member states, China, India, the Republic of Korea, Australia, Canada, France, New Zealand, the United States, EU and Japan participated in the meeting.

1 In his opening remarks, Mr. HONSEI Kozo, Director-General of Disarmament, Non-Proliferation and Science Department, Ministry of Foreign Affairs stated that he was delighted to have attendees from all partners even during an unprecedented crisis of the coronavirus pandemic. He also stated that he hoped this meeting would serve as an opportunity to further strengthen efforts and partnership towards the shared non-proliferation objectives in the Asia-Pacific where serious proliferation challenges including issues related to North Korea's nuclear and missile programs continue to exist.

2 The participants actively exchanged views mainly on the following topics:
(1) Efforts against North Korea's nuclear and missile programs including the full implementation of the relevant UN Security Council resolutions; and
(2) Efforts and challenges in strengthening export control and cooperation in capacity building.