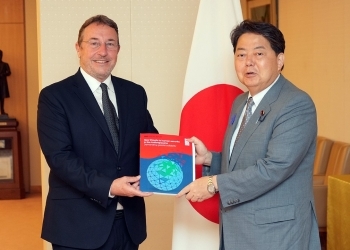 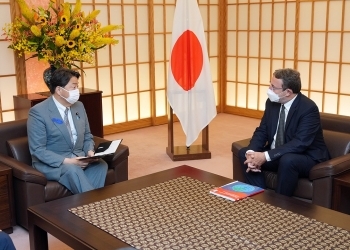 On July 13, commencing at 10:00 a.m., Mr. HAYASHI Yoshimasa, Minister for Foreign Affairs of Japan, held a meeting with Mr. Achim Steiner, Administrator of the United Nations Development Programme (UNDP), for approximately 20 minutes. The overview is as follows.

The UNDP is the largest development organization within the United Nations system. The UNDP has a global network with a high level of expert knowledge and a wealth of experience, and is performing a leading role in promoting initiatives towards achieving the SDGs. The UNDP is an important partner for Japan in the promotion of the development agenda, including as the co-organizer of TICAD. Japan is working together with the UNDP to resolve global challenges such as health (Universal Health Coverage (UHC)), gender equality, supporting measures against climate change, and promoting human security.