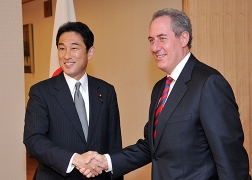 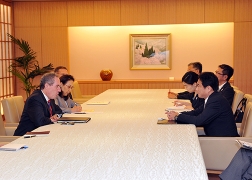 On Monday, August 19, Mr. Fumio Kishida, Minister for Foreign Affairs, had a meeting with Ambassador Michael Froman, United States Trade Representative. The meeting started at 2pm and continued for about 30 minutes. The outline of the meeting was as follows (also attended by Director-General for Economic Affairs Bureau Mr. Katakami, Ambassador in charge of Economic Diplomacy Mr. Mori and others from the Japanese side, and Acting Deputy USTR Ms. Cutler and others from the U.S. side).

1. At the outset, Foreign Minister Kishida welcomed Ambassador Froman’s visit to Japan and stressed that Japan-U.S. relationship is the lynchpin of security and prosperity not only for the Asia-Pacific but also globally, and thus wishes to further strengthen the bilateral relationship. He also expressed his intention to work together on trade issues, and in particular the Trans-Pacific Partnership (TPP) negotiations, in order to further strengthen the Japan-U.S. bilateral economic relations, which is one of the important pillars of the bilateral relationship. Ambassador Froman responded by saying that he looked forward to collaborating with Minister Kishida.

2. With regard to the TPP negotiations, Minister Kishida and Ambassador Froman confirmed that TPP is a critical framework in realizing prosperity in the Asia-Pacific region, and that the two countries will work together in achieving a comprehensive and high-standard agreement this year.

3. Also, with regard to the Japan-U.S. parallel negotiations on automobile trade and non-tariff measures Minister Kishida and Ambassador Froman confirmed that the negotiations are important and both sides will continue to collaborate in a constructive manner.

These parallel negotiations were determined to take place as a result of Japan-U.S. consultations regarding Japan’s participation into the TPP negotiations. The first round of talks, which was held from August 7 to August 9, was attended by officials from relevant ministries led by Mr. Takeo Mori, Ambassador in charge of Economic Diplomacy, MOFA, from the Japanese side, and a delegation led by Ms. Wendy Cutler, Acting Deputy United States Trade Representative, from the U.S. side.