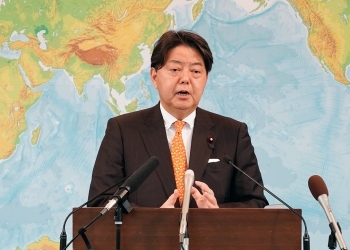 Air Strike by the Myanmar Military in Kachin State

Mr. HAYASHI Yoshimasa, Minister for Foreign Affairs: I have one announcement. On October 23, the Myanmar military carried out an air strike during an annual event of the Kachin Independence Army, an ethnic minority group in Hpakant, Kachin State in northern Myanmar. I am deeply saddened by reports that many civilians were killed or injured.

Japan has consistently called for the suspension of the violence since the coup d’état occurred in Myanmar last year. We take it extremely seriously the fact that a large number of civilians were killed or injured in this incident, and condemn such attacks.

In order to achieve a breakthrough, the Government of Japan again strongly urges the Myanmar military to make sincere efforts for the peaceful resolution of the situation by taking concrete actions to immediately stop the violence, release those who are detained including State Counsellor Aung San Suu Kyi, and swiftly restore Myanmar’s democratic political system, and through swiftly implementing ASEAN’s “Five-Point Consensus.”

Resignation of Minister in charge of Economic Revitalization Yamagiwa

NHK, Iwasawa: I would like to ask about the resignation of a cabinet member. Minister in charge of Economic Revitalization Yamagiwa, whose relations to the former Unification Church have come to light time and again, resigned last night. Please tell us your thoughts on the effects of this on the government administration.

Minister Hayashi: The appointments and dismissals of cabinet ministers are solely the prerogative of the prime minister. I believe that I am not in a position to answer your question.

In any case, I will firmly fulfill my duties as Minister for Foreign Affairs.

Relations with the Former Unification Church

Asahi Shimbun, Nohira: I would like to ask about relations with the former Unification Church. During past national elections, have you ever received any written endorsements or similar documents from the former Unification Church or other related entities? If so, please tell us the details, such as the month and year, the content of the document, and whether you have signed it or not.

Minister Hayashi: It is confirmed that we have not received any documents from the entities you pointed out.

Kyodo News, Ueda: I would like to ask about Japan-China relations. The administration for the third term of Secretary-General Xi Jinping of China has been inaugurated. How do you intend to procced with Japan-China relations when there are many pending issues, such as the situation in Taiwan? Please tell us the policy going forward, including details such as the timing and format of a summit meeting.

Minister Hayashi: I would like to refrain from commenting based on speculation regarding the activities of the political parties in other countries and their impact. Japan is monitoring the relevant movements.

Japan’s consistent position is to says what needs to be said and call on China to act responsibly, while both sides make efforts to build constructive and stable Japan-China relations in which both sides firmly conduct dialogue, including on various pending issues, and cooperate on various common issues.

Moreover, discussions are being held among the relevant cabinet ministers and within the ruling parties with regard to the formulation of the National Security Strategy and other documents. The Ministry of Foreign Affairs will continue to make active contribution.

Yomiuri Shimbun, Kaneko: I would like to ask about Russia’s invasion of Ukraine. Russia claims that the Ukrainian side is planning to use a “dirty bomb” with the aim of spreading radioactive material, while the United States and Europe are strengthening criticism that Russia is using this claim as an excuse to use its own bomb. Please tell us your opinion on whether or not the Government of Japan also has a growing concern that Russia could use such a bomb.

Minister Hayashi: On October 23, it was announced that Russia expressed its concern over the use of “dirty bombs” by Ukraine during its defense ministers’ telephone meetings with the United Kingdom, France and others. On the other hand, on the same day, the United Kingdom, the United States, and France issued a joint declaration stating that Russia’s allegations about Ukraine being prepared to use a “dirty bomb” are false, and that they reject any pretext for escalation by Russia.

On behalf of Japan, I would like to refrain from commenting based on speculation on the possibility of Russia using a weapon such as the one you mentioned as a pretext for escalation. Further escalation by Russia would be absolutely unacceptable, and Japan will monitor this matter with grave concern.

Japan will continue to work closely with the international community, including the G7, and once again strongly urge Russia to immediately cease its aggression and withdraw its forces.

Asahi Shimbun, Nohira: I would like to ask about the joint declaration that was announced at the recent Japan-Australia Summit Meeting. The declaration states, “We will consult each other on contingencies that may affect our sovereignty and regional security interests, and consider measures in response.” What kinds of specific situations are assumed by the term “contingencies,” and what specific response measures could be taken?

Minister Hayashi: The recently signed Australia-Japan Joint Declaration on Security Cooperation states that Japan and Australia will consult with each other and consider responses to contingencies that could affect our sovereignty and regional security interests.

Specifically, while coordinating on our strategic assessments, Japan and Australia will discuss all responses in order to safeguard the peace and security of our countries and the region according to the situation, from peacetime to contingencies. The content of our responses would depend on each situation. Rather than being limited to military responses, I believe various diplomatic and economic responses could also be considered comprehensively.

The confirmation of consultation in the joint declaration is part of our efforts to strengthen Japan-Australia security and defense cooperation based on the current strategic environment.

NHK, Iwasawa: I would like to ask about the issue of the former civilian workers during the Pacific War. Concerning the resolution of this issue, there are some reports that the governments of Japan and the ROK have entered full-fledged consultations focused on a proposal to have an ROK foundation make compensation payments on behalf of the relevant Japanese companies. Please tell us about the state of consultations between the governments of Japan and the ROK, including whether this is true.

Minister Hayashi: I would like to refrain from commenting on each of the reports. Additionally, Japan has repeatedly conveyed to the ROK that, if the seized assets of Japanese companies were to be liquidated, it would lead to a serious situation for Japan-ROK relations and therefore must be avoided.

Japan will continue to closely communicate with the Government of the ROK in order to restore healthy Japan-ROK relations and further develop them.

Yomiuri Shimbun, Kaneko: I would like to ask about North Korea. North Korea has been escalating its provocative actions, including a North Korean boat crossing the Northern Limit Line on October 24. Now that the National Congress of the Communist Party of China has ended, some people view that North Korea may conduct a nuclear test. Please tell us the view of the Government of Japan.

Minister Hayashi: The Government of Japan gather necessary information and analyze military movements by North Korea. I believe that it is possible that North Korea will conduct further provocative actions, including implementing a nuclear test.

North Korea’s nuclear and missile development pose a threat to the peace and security of Japan and the international community and must not be tolerated. Japan will continue to maintain close Japan-U.S. cooperation and Japan-U.S.-ROK cooperation, and cooperate with the international community, advance the complete implementation of the relevant United Nations (UN) Security Council resolutions, and work towards the complete denuclearization of North Korea.