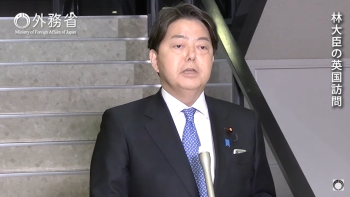 Visit to the United Kingdom by Foreign Minister Hayashi

Mr. HAYASHI Yoshimasa, Minister for Foreign Affairs: At the outset, I would like to announce that I will be visiting Liverpool in the United Kingdom to attend the Meeting of G7 Foreign and Development Ministers from tonight until December 12, and I am also scheduled to hold meetings with the foreign ministers of the United States, United Kingdom, and other countries.

I would like to hold frank exchanges of views on regional affairs and various issues of the international community with my counterparts from the G7 countries, which share fundamental values with us, and firmly convey Japan’s views.

Against the backdrop of the United Kingdom, which holds the G7 Presidency, and other G7 countries strengthening their engagement in the Indo-Pacific region, Japan intends to firmly show its presence in this regard and actively contribute to relevant discussions. That is all from me.

TV Asahi, Sawai: While diplomacy faces restrictions due to the impact of the novel coronavirus pandemic, this will be the first in-person international meeting you will attend since you took office as the Minister for Foreign Affairs. Could you please tell us again your determination on your first overseas visit, and what kind of messages you intend to convey as Minister for Foreign Affairs?

In addition, regarding the issue of a so-called diplomatic boycott of the Beijing Winter Olympics, three of the G7 countries have already decided not to send a government delegation to the event. Former Prime Minister Abe and other members of the Liberal Democratic Party are also calling on the Government of Japan to make an early decision. Do you think the G7 Ministers’ Meeting this time will likely have an impact on the government’s decision? Please tell us your views, including the timing of the decision.

Minister Hayashi: Since my previous visit to Geneva was canceled, attending this meeting in Liverpool is going to be my first overseas visit. Needless to say, I will brace myself and make the utmost effort to realize Japan’s national interests.

On the issue of the Olympic Games, concerning the response by the Government of Japan to the Beijing Games, we will decide at a suitable time, after a sufficient and comprehensive review of various elements. However, at this point, nothing has been decided yet.

No First Use (NFU) of Nuclear Weapons

Chugoku Shimbun, Higuchi: Regarding the NFU of nuclear weapons, which is currently the focus of nuclear policies, some media sources have reported that the United States’ side had mentioned their intention not to adopt it. To date, you have expressed your cautious view regarding the adoption of the NFU of nuclear weapons at press conferences and other opportunities. Please once again explain your view in response to the media reports on the United States’ intention. In addition, given that this is your first Foreign Ministers’ Meeting, please tell us your thoughts on what discussions you predict there will be with Secretary of State Blinken regarding nuclear policies, including the matter of NFU.

Minister Hayashi: I am aware of the news reports that you mentioned. However, as far as I know, the Government of the United States has not made any official announcement, and I would like to refrain from commenting on behalf of the Government of Japan on each of those reports.

Having that said, generally speaking, I believe that declarations on NFU would not be meaningful unless all nuclear-weapon states make such a declaration at the same time in a verifiable manner. At the moment, I believe that it would be difficult to fully expect that Japan is secure by relying on the NFU concept without any method to verify the intentions of the countries concerned. Regarding the G7, it is as I stated earlier.

Chugoku Shimbun, Higuchi: Are you planning to discuss the matter of the NFU of nuclear weapons during the G7 Meeting this time?

Minister Hayashi: As I have just mentioned since there has been no official announcement made by the Government of the United States, I will participate in the meetings based on such understanding.