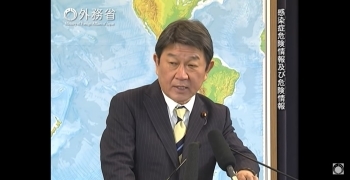 Mr. MOTEGI Toshimitsu, Minister for Foreign Affairs:Next week will be “ASEAN week” for me, and the ASEAN-related Foreign Ministers’ Meetings will be held online.

During the series of meetings, we plan to exchange our views on responses to the novel coronavirus, as well as regional affairs including the situation in Myanmar, the South China Sea issue, and the North Korean affairs. I will firmly explain Japan’s policies and views in the meetings, and confirm to strengthen our cooperation with relevant countries.

ASEAN is the linchpin in realizing a “Free and Open Indo-Pacific” (FOIP). I would like to hold in-depth discussions on specific cooperation toward realizing FOIP while emphasizing Japan’s support for the ASEAN Outlook on the Indo-Pacific (AOIP). That is all from me.

NHK, Yamamoto:I would like to ask about the series of ASEAN-related meetings you just mentioned. Since the situation in Myanmar will be discussed in the meetings, what will Japan argue regarding this issue, as August 1 would mark exactly six months since the coup d’état in Myanmar?

Minister Motegi:Regarding the situation in Myanmar, the coup d’état occurred on February 1, and since then, Japan has been calling for an immediate cessation of violence, the release of the detainees including State Counsellor Daw Aung San Suu Kyi, and a swift restoration of democratic political system.

Going forward, out of the Five-Point Consensus, we are reaching the point where the dispatching of a special envoy to Myanmar and the beginning of a dialogue within Myanmar is the main focus. During the ASEAN-related meetings, I would like to firmly discuss these issues.

Declaration of the Invalidity of the General Election in Myanmar

Jiji Press, Kondo:In relation to the situation in Myanmar, the election commission appointed by the Myanmar junta recently declared that the general election held in November 2020 is invalid. There are some who say that Myanmar junta will move to dissolve the National League for Democracy (NLD). I believe this would go against the democratization movement in Myanmar. Please tell us the position of Japan regarding the validity of the 2020 election, and whether Japan will strengthen its pressure against the Myanmar junta.

Minister Motegi:The development you pointed out goes against the swift restoration of Myanmar’s democratic political system, which Japan has been calling for up until now, and therefore is undesirable.

In any case, as I stated earlier, I believe that dialogues in various forms among people in different positions within Myanmar is necessary. Through such dialogues, parties can explore how to restore the democratic political system. Amidst this situation, I believe the special envoy has a major role to play. Japan would like to support and back such efforts.

NHK, Yamamoto:I would like to ask about Japan-Russia relations. Prime Minister Mishustin of Russia visited Etorofu Island in the Northern Territories this Monday. You issued a statement about this as well. During his visit, Prime Minister Mishustin indicated that he would like to set up a special zone with preferential treatment such as tariff exemptions, and attract foreign investment. I believe Russia has not revealed any further details, but has Russia provided any sort of specific explanation to the Government of Japan?

We have not received any specific explanation on what has been reported, including matters such as what would happen to taxes. Since last year, it has become quite difficult to make specific progress in the joint economic activities, including the actual travel of people, due to the novel coronavirus crisis. I believe it would be beneficial to have discussions on making further progress in the joint economic activities, or depending on the situation, to discuss in which field we could elevate Japan-Russia cooperation to a new stage.