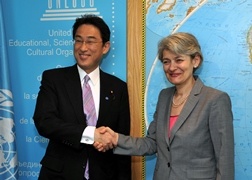 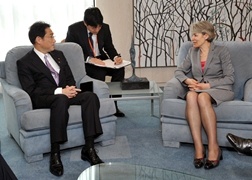 On May 6, commencing at 4:30 p.m. for approximately 30 minutes, Minister for Foreign Affairs Fumio Kishida held a meeting with H.E. Mrs. Irina Bokova, Director-General of the United Nations Educational, Scientific and Cultural Organization (UNESCO) at UNESCO Headquarters in Paris. An overview of the meeting is as follows:

(1) At the beginning, Director-General Bokova welcomed Foreign Minister Kishida as the first Japanese Minister of Foreign Affairs to visit UNESCO, and along with praising the achievements of former Director-General Mr. Koichiro Matsuura, she acknowledged that Japan is a powerful supporter of UNESCO.

(2) Minister Kishida noted that UNESCO was the first international organization that Japan joined after World War II, and said Japan continues to contribute to UNESCO and highly praises UNESCO’s engagement in reform and rationalization, which was passed on from former Director-General Matsuura to Director-General Bokova. Minister Kishida also said that UNESCO Goodwill Ambassador Dr. Genshitsu Sen, whose term was extended in March this year, is an excellent Japanese tea master who is committed to world peace through the Way of Tea, and is expected to continue to play an active role.

(1) Minister Kishida said he is pleased that the International Council on Monuments and Sites (ICOMOS) recommended the Government of Japan’s nomination of the “Tomioka Silk Mill and Related Sites” to be inscribed on the World Heritage List, and he will do his utmost in the run-up to the decision at the World Heritage Committee session in June.

(2) In response, Director-General Bokova expressed gratitude for the support Japan extends to UNESCO in the field of cultural heritage preservation, along with stating that she is satisfied with ICOMOS’ recommendation for the “Tomioka Silk Mill and Related Sites” and anticipates that a positive decision will be made at the coming session of World Heritage Committee in June.

(1) Minister Kishida said he is aware that Director-General Bokova also participated in the thematic meeting on “Culture and Sustainable Development” hosted by the UN Secretary-General at the UN Headquarters on May 5, and that meaningful discussions took place. He stressed that Japan also emphasizes culture, and said the Government of Japan intends to continue to support UNESCO’s priority, gender equality (particularly for women) and activities in Africa.

In addition, Minister Kishida praised UNESCO’s contribution to formulating the post-2015 education agenda, along with stating that Japan also wants to work on having “education” positioned as a clear goal in the Post-2015 Development Agenda. He requested that Director-General Bokova attends the 2014 UNESCO World Conference on Education for Sustainable Development (ESD) scheduled to be held in Nagoya City, Aichi Prefecture and in Okayama City in November this year and calls on other countries to participate at the ministerial level. Furthermore, Minister Kishida said he hopes that Director-General Bokova and UNESCO will actively participate in the 3rd UN World Conference on Disaster Reduction (WCDR) scheduled to be held in Sendai in March next year.

(2) In response, Director-General Bokova said Culture and Sustainable Development are important, and based on that importance she wants to achieve the highest possible level of participation in the World Conference on ESD. She said UNESCO is also undertaking various initiatives in the field of disaster prevention. Sendai is the birthplace of UNESCO Private-Sector Associations (see Note), and she is also looking forward to the WCDR in March next year.

(2) Director-General Bokova expressed gratitude for the holding of the International Jazz Day in Osaka.

(Note) In 1947 the Sendai UNESCO Association was established as the first private-sector UNESCO association in the world, with the goal of promoting the principles of UNESCO.