The United Nations Transitional Authority in Cambodia (UNTAC) was a major UN peacekeeping operation carried out with the participation of various UN member states. At UNTAC's request, Japan provided military and civilian personnel for secondary support in areas such as civilian policing and electoral monitoring, as well as engineering battalions to repair roads and bridges.

Personnel of the Japan Self-Defense Forces were dispatched to UNTAC as cease-fire observers. Eight personnel were dispatched from September 1992 to March 1993; a second contingent of eight personnel was dispatched from March to September 1993. They conducted their duties in teams with peacekeepers from other countries. Their mission was to monitor the cease-fire and to supervise encampments storing weapons collected from disarmed Cambodian soldiers of all factions. They also monitored the cease-fire at checkpoints along the border and monitored any infiltration of other forces and smuggling of weapons and ammunition. 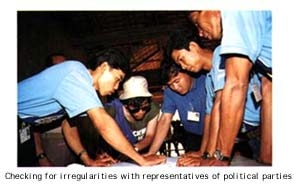 Staying at schools, temples, and other locations during the election period, the electoral observers monitored and assisted in administering the election. In addition, from May 29 to June 1, they monitored ballot-counting in around-the-clock shifts at election offices in Takeo and Phnom Penh.

The election was carried out generally in a free and fair manner. Votes were cast by 4.26 million people, or approximately 90 percent of eligible voters, far more than had been expected.

Japan dispatched 75 civilian police officers to UNTAC from October 1992 to July 1993 to assist in training the Cambodian police force. They were assigned to provincial and local police stations where they surveyed and monitored police activities to ensure fairness and neutrality. They also trained the local police in investigation of actual criminal cases.

Their mission was comprehensive and included control of rush-hour traffic in Phnom Penh and other cities. The Japanese officers were assigned to the same police stations and shared accommodation and dining facilities. 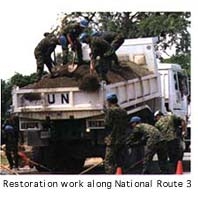 Japan dispatched two 600-member engineering contingents of the Japanese Ground Self-Defense Force to UNTAC. The first contingent remained in Cambodia from September 1992 to April 1993; the second from March to September 1993.

Their mission was to reconstruct roads and bridges on routes 2 and 3, which were damaged during the civil war; furthermore, they performed a wide range of additional activities. At the request of UNTAC, their mission was expanded to include providing UNTAC with water, fuel, food, medical service and lodging facilities. They also transported and stored supplies.

The engineering contingents carried out their mission with much caution, as they had to contend with the danger of land mines in the regions where they worked and endured harsh conditions, including daytime temperatures exceeding 40 degree.