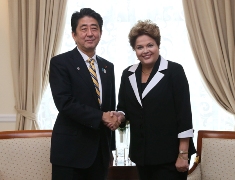 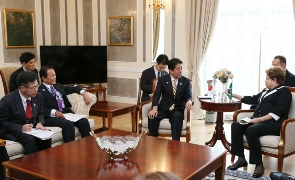 On Thursday, 5 September, commencing at 11:51 a.m. (4:51 p.m. Japan time) for approximately 40 minutes, Prime Minister Shinzo Abe, who is currently visiting Saint Petersburg in the Russian Federation in order to attend the G20 Summit, held Japan-Brazil summit talks with H.E. Ms. Dilma Vana Rousseff, President of the Federative Republic of Brazil. The overview of the meeting is as follows.
1. Bilateral relations and cooperation in the field of economics
At the outset, Prime Minister Abe stated that Japan and Brazil are partners that share basic values, and that Japan is looking forward to receiving a visit of President Rousseff to Japan. Prime Minister Abe added that Japan would continue to value the special relationship of trust that it has developed with Brazil in the context of history and traditions.
President Rousseff responded by reiterating that she was looking forward to visiting Japan, and offered her congratulations with regard to the outcomes that Japan has achieved based on the success of Abenomics. She added that Japan’s policies would serve as a model for developing countries that were working to recover from a financial crisis. She also praised investments that Japanese companies have made in Brazil and stated that she was hoping that more such investments would be made.
In response, Prime Minister Abe thanked President Rousseff for her praise regarding Abenomics, and stated that Japan intends to further collaborate with Brazil in a variety fields such as infrastructure development, disaster management, and human resource development based on initiatives such as the Science without Borders program.
2. Sports and people to people exchanges
Prime Minister Abe stated that he was hoping that next year’s Soccer World Cup, at which the Japanese team has secured a spot, and the 2016 Olympic and Paralympic Games in Rio de Janeiro would be successful, and that he hopes that the 2020 Olympic Games and Paralympic Games will be held in Tokyo. President Rousseff responded that it would be wonderful if the Japanese and Brazilian teams were to meet in the final at the 2014 FIFA World Cup Brazil, and that she was hoping that Tokyo would be chosen as the host city for the 2020 Olympic and Paralympic Games.
3. Economic issues and the G20 Summit
President Rousseff stated that in terms of issues at the G20 Summit, there is a need for discussions about possible impact that future adjustments to expansionary financial policies would have on emerging economies. Prime Minister Abe responded by commenting that this G20 Summit’s theme of growth and employment is a timely one, and that it is important to ensure the transparency of economic policies.
4. International situation
Prime Minister Abe stated that coordination among G4 countries regarding United Nation Security Council reform continues to be important for pursuing realizable reform model and building momentum toward such reform. President Rousseff stated that reforming the Security Council to       enhance its legitimacy has become increasingly important, as can be seen by the Security Council’s response to  the current situation in Syria, and she added that it is important to develop a multinational framework with regard to cyber security.