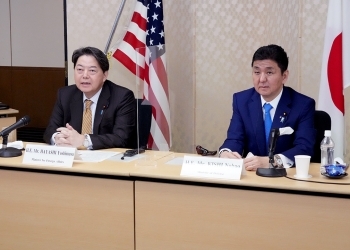 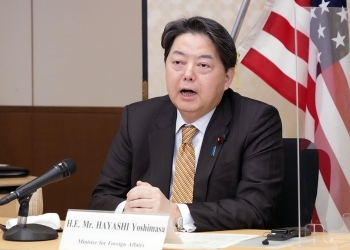 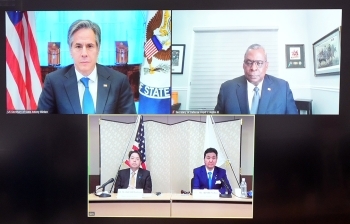 On January 7, commencing at 7:30 a.m. for approximately 1 hour and 30 minutes, the Japan-U.S. Security Consultative Committee (SCC) (Japan-U.S. “2+2”) was convened virtually. The meeting was attended by Mr. HAYASHI Yoshimasa, Minister for Foreign Affairs, and Mr. KISHI Nobuo, Minister of Defense, from the Japanese side, and the Honorable Antony Blinken, Secretary of State, and the Honorable Lloyd Austin, Secretary of Defense, from the U.S. side. The overview of the meeting is as follows (a Joint Statement (PDF)

was released following the meeting).

The four ministers shared their recognition on the evolving regional security environment in detail, and exchanged their views on enhancing collaboration with like-minded partners.

The four ministers had concrete discussions toward fundamentally enhancing the Alliance’s deterrence and response capabilities, to effectively address challenges the both countries face today. Furthermore, they concurred on the importance of vigorously continuing their efforts to ensure the Alliance maintains its competitive edge into the future, such as further enhancing information security, deepening cooperation in space and cyber domains, and advancing technological cooperation to harness emerging technologies and of pursuing investments to strengthen the Alliance’s capabilities looking ahead to the future.

The four ministers shared the importance of steadily implementing the realignment of U.S. forces in Japan, from the perspective of mitigating the impact on local communities including Okinawa, while maintaining the deterrence of the Japan U.S. Alliance.