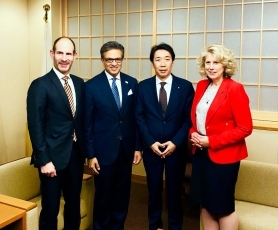 On November 19, commencing at 17:00 for 30 minutes, Mr. NAKAYAMA Norihiro, Parliamentary Vice-Minister for Foreign Affairs received a courtesy call from Mr. Goldy Hyder, President of the Business Council of Canada (BCC), and Canadian CEOs. The overview of the meeting is as follows.