Courtesy Call on Prime Minister Shinzo Abe by Secretary of Transportation of the United States of America Elaine L. Chao 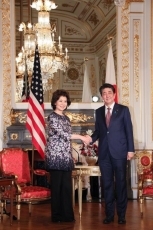 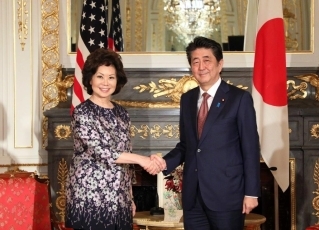 On October 23, commencing from around 16:10 for approximately 15 minutes, Prime Minister Shinzo Abe received a courtesy call by The Honorable Elaine L. Chao, Secretary of Transportation of the United States of America. The overview of the courtesy call is as follows. Attendees to the meeting include, from the Japanese side, Deputy Chief Cabinet Secretary Nishimura Akihiro and Special Advisors to the Prime Minister Izumi Hiroto and Hasegawa Eiichi, and from the U.S. side, Charge d’Affairs ad interim Joseph M. Young.

1. At the beginning, Prime Minister Abe expressed his sincere appreciation that President and Mrs. Trump visited Japan in May as the first state guests in the era of Reiwa and conveyed their deep congratulations directly to Their Majesties the Emperor and the Empress and that President Trump issued a celebrational statement on October 22. The Prime Minister also expressed his delight to welcome Secretary Chao on this historic occasion.