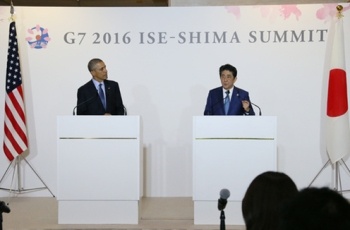 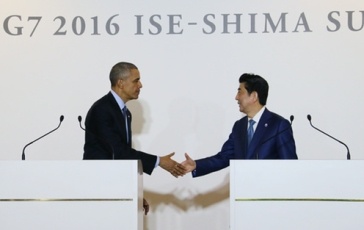 On the evening of May 25, commencing at 9:40 p.m. for approximately 20 minutes, Mr. Shinzo Abe, Prime Minister of Japan, held a small meeting with the Honorable Barack H. Obama, President of the United States, who is visiting Japan for the G7 Ise-Shima Summit, and an expanded meeting with President Obama commencing at 10:00 p.m. for approximately 35 minutes. The overview is as follows.

(1) At the small meeting, the entire time was spent discussing the incident that occurred in Okinawa. Prime Minister Abe stated to President Obama that: (a) he felt strong indignation over the incident, which was a self-centered and absolutely despicable crime, and lodged a strong protest as Prime Minister of Japan; (b) the incident caused a huge shock not only to Okinawa but to the entire nation, and he hoped President Obama would take these feelings of Japanese citizens seriously; (c) he has a responsibility to protect the lives and property of Japanese citizens; and (d) he seeks strict actions, including the full implementation of effective measures to prevent recurrences.

(2) In response, President Obama stated that: (a) he expresses his sincerest condolences and deepest regrets and profoundly understands his responsibility concerning the crime committed by a person related to the U.S. forces; and (b) the United States will cooperate fully with Japan’s investigation, and will spare no effort to cooperate in every way to achieve justice.

At the beginning of the expanded meeting, Prime Minister Abe expressed his happiness at being able to meet President Obama in the scenic location of Ise-Shima, and his sincere gratitude for the heartfelt sympathy from the United States and prompt and powerful assistance in response to the Kumamoto Earthquake.

Furthermore, the two leaders shared the view that Japan and the United States will coordinate closely on the G7 Summit and display the G7’s unwavering resolve and response to international and regional challenges.

In light of the increasingly uncertain global economic situation at present, the two leaders shared the view that Japan and the United States will cooperate to realize strong, sustainable, and balanced growth.

Prime Minister Abe explained that he hoped to deliver a powerful message at the Summit on promoting Mega Free Trade Agreements (FTAs), including the Trans-Pacific Partnership (TPP) Agreement, and the two leaders shared the view that they will continue with efforts to have the TPP Agreement promptly approved.

Prime Minister Abe stated that it was important for the G7 to issue a clear message that it could not tolerate the possession of nuclear weapons by North Korea becoming established as a fait accompli, and the two leaders once again shared recognition that coordination between Japan, the United States, and the Republic of Korea was important.

Prime Minister Abe stated that he hoped to further strengthen the network of peace and prosperity that was founded on the U.S.-Japan Alliance, and expressed the view that strengthening cooperation with Association of Southeast Asian Nations (ASEAN) members such as Viet Nam and the Philippines, which President Obama just visited, was a pressing issue. Regarding the importance of the rule of law at sea, the two leaders confirmed that Japan and the United States will solidly fulfill their roles within the international community.

President Obama stated that he hoped to count on Prime Minister Abe’s leadership in bringing the Paris Agreement that was adopted at the 21st session of the Conference of the Parties (COP21) into force promptly, and the two leaders confirmed proactive cooperation on this matter.