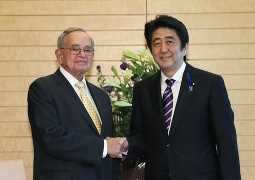 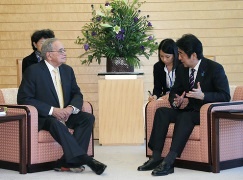 1. At the beginning, Prime Minister Abe welcomed Chairman Emeritus Melamed to Japan, and said he understood that Chairman Emeritus Melamed was called “the founder of the financial futures market” and established a financial futures market in Chicago, U.S. In addition, Prime Minister Abe said he was again reminded that a precious life was saved as a result of Japanese diplomat Chiune Sugihara’s “visa for life.”

2. In response, Chairman Emeritus Melamed said nothing that he could have done was possible without the actions of Chiune Sugihara, who saved him and the 6,000 refugees, and that he was the righteous of Japan and the most important person in Japan’s history.

4. During the courtesy call, views were also exchanged on Japan’s economic policies, cooperation between Japan and the U.S. in futures trading and other topics.

(* The foregoing is a provisional translation. The above date denotes the date of the issue of the original press release in Japanese.)
Page Top
Back to Countries & Regions