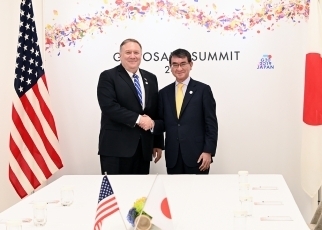 On June 28, commencing at 11:30 a.m. for approximately 20 minutes, Mr. Taro Kono, Minister for Foreign Affairs of Japan, held a Foreign Ministers’ Meeting with the Honorable Mike Pompeo, Secretary of State of the United States of America, who is visiting Japan to attend the G20 Osaka Summit. The overview of the meeting is as follows.