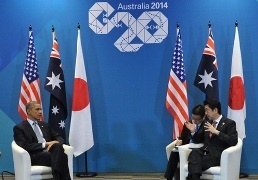 Photo: Cabinet Public Relations Office
On November 16, commencing at 9:45 a.m. for approximately 25 minutes during his visit to Brisbane, Australia, Prime Minister Shinzo Abe held a Japan-U.S. Summit Meeting with the Honorable Barack H. Obama, President of the United States of America. The overview of the meeting is as follows.

(1) At the beginning, Prime Minister Abe welcomed President Obama's visit to the Asia-Pacific region as reemphasizing the stance of the United States to continue its  policy of attaching importance to the Asia-Pacific region, the so-called "rebalance policy", and said the remarks that President Obama gave on the U.S.' Asia policy on the previous day was also excellent.
(2) Prime Minister Abe said it is important for both countries to maintain and strengthen cooperation based on the Japan-U.S. alliance in order to fulfil their leading roles in the Asia-Pacific region. Additionally, Prime Minister Abe said that he will engage with strong resolve in the Realignment of the U.S. Forces in Japan, and that he hopes to continue to cooperate with the U.S. in reducing the burden on Okinawa.
(3) In response, President Obama said the U.S. side, led by its national security team, also wants to cooperate on the points raised by Prime Minister Abe. The two leaders concurred that they will advance security and defense cooperation on a broad range of fields, including the review of the Guidelines for Japan-U.S. Defense Cooperation.

(1) Prime Minister Abe said that if approved by the Diet, he is scheduled to announce  up to 1.5 billion U.S. dollars in pledges to the Green Climate Fund(GCF) while taking into consideration the size of each country's contribution. President Obama expressed his appreciation in response.
(2) The two leaders shared recognition that these contributions by both Japan and the United States will be a major driving force toward reaching an agreement on a new framework of climate change. Under this recognition, the two countries decided to issue a Japan-U.S. joint announcement on contribution to the GCF.

The two leaders also discussed TPP, and concurred that they will continue to make further efforts for an early conclusion of the negotiation.

Regarding Japan-Republic of Korea (ROK) relations, Prime Minister Abe said he agrees with the comment by Ms. Park Geun-hye, President of the ROK, on realizing a Japan-China-ROK meeting, and he intends to aim for an early realization of the meeting  as well. President Obama responded by expressing his appreciation and expectation over the efforts to improve the Japan-ROK relations.
Page Top
Back to Japan-United States of America Relations