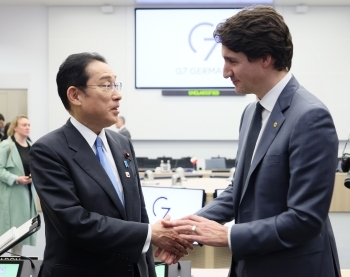 On March 24th, commencing at 4:47 pm (at 0:47am on March 25th, Tokyo time ) Mr. KISHIDA Fumio, Prime Minister of Japan, who is visiting Belgium, held a talk briefly after the G7 Summit Meeting with the Right Honourable Justin Trudeau, Prime Minister of Canada. The overview of the talk is as follows.

Prime Minister KISHIDA stated that the cooperation between Japan and Canada is becoming increasingly important for maintaining the free and open world order based on the rule of law, and expressed Japan’s interest to continue coordinating closely with Canada, including at the G7, to address issues such as the situation in Ukraine. In response, Prime Minister Trudeau also mentioned that he would like to further promote the cooperation between Japan and Canada.