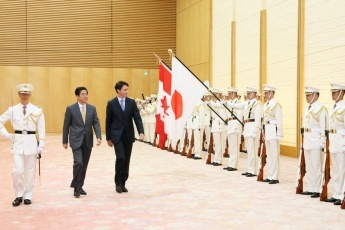 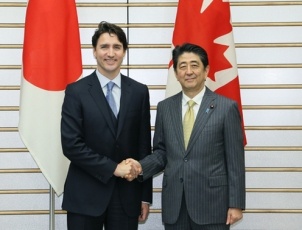 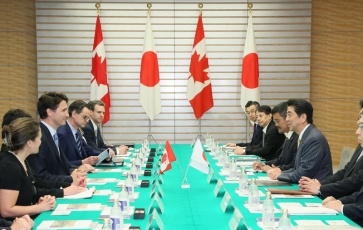 On May 24, commencing at about 6:25 p.m. for approximately one hour, Mr. Shinzo Abe, Prime Minister of Japan, held a Summit Meeting with the Rt. Hon. Justin Pierre James Trudeau, Prime Minister of Canada, who is visiting Japan as an official state guest. The overview of the meeting is as follows.

(1) Prime Minister Abe expressed a heartfelt welcome for the Prime Minister’s visit to Japan and commented that the two leaders had deepened their mutual understanding through the two previous Summit Meetings and that he hopes to reconfirm collaboration between Japan and Canada for success in the Ise-Shima Summit and conduct a broad exchange of views on bilateral cooperation.

(2) In response, Prime Minister Trudeau noted that he had been looking forward to this visit to Japan and was happy to receive a warm welcome from Japanese people, that there is significant potential to further advance friendly relations with Japan, and that Japan, the destination for his first bilateral visit in Asia, is an important partner in the Asia-Pacific region, and that he has great hope for Prime Minister Abe’s leadership at the Ise-Shima Summit.

(3) The two leaders agreed to further advance their bilateral relations that have a long history and bolster collaboration in the international arena as well as create a new era for cooperation between Japan and Canada.

The two leaders discussed responses for realizing robust, sustainable, and balanced growth in light of the current global economic situation with its growing uncertainty in regard to the global economy, the top theme for this Summit, and agreed that the G7 nations should take the lead in addressing the global economy and challenges to the international order.

(3) Both leaders welcomed the agreement to promote evolution of the Japan-Canada Joint Economic Committee (JEC) in order to meet today’s requirements in five main areas of infrastructure, energy, science and technology, business environment and investments, and tourism and student exchanges. They agreed to create a “new JEC” at an early stage and move forward in cooperation.

(4) Additionally, Prime Minister Abe stated that it is vital to promptly realize LNG exports from Canada and quickly move to create visible improvements in the business environment, and voiced his expectations for leadership by Prime Minister Trudeau. In response, Prime Minister Trudeau explained that he is taking these matters seriously and intends to proceed with detailed responses.

4. Regional situations and other matters

(1) The two leaders exchanged opinions on conditions in East Asia, including North Korea, and confirmed the need for applying meaningful pressure on North Korea through strict enforcement of the Security Council resolution and other sanctions. They also agreed to conduct strategic discussions on regional situations, such as the South China Sea and Russia and Ukraine, at the Ise-Shima Summit.

(2) Prime Minister Abe explained that early execution of the Trans-Pacific Partnership (TPP) is important for strengthening the economic relationship between Japan and Canada and that Japan is striving for early approval in its National Diet. The two leaders confirmed that they intend to make advances on this debate in their respective countries. 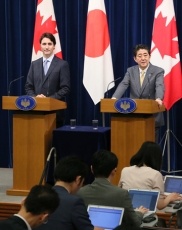 The two leaders confirmed their collaboration on early execution and effective implementation of the Paris Agreement and agreed to continue cooperating on responses to global issues, including climate change.