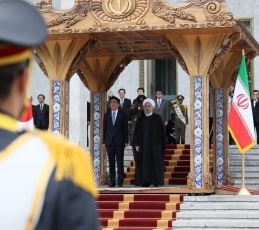 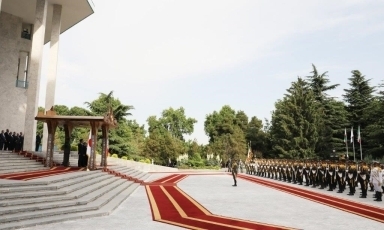 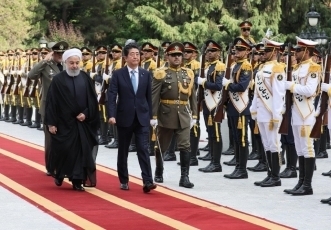 At the beginning, Prime Minister Abe stated that he was honored to visit Iran for the first time in the past 41 years by a Japanese Prime Minister, on this milestone year of the 90th anniversary of the establishment of Japan-Iran diplomatic relations.

At the expanded meeting, a discussion was held on the bilateral relations as well. Prime Minister Abe stated that Japan would continue to give priority to extending cooperation that benefits the people of Iran in such areas as medical care, environment, and disaster risk reduction.
In this context, Prime Minister Abe announced Japan’s additional emergency humanitarian assistance for the flooding in Iran in April, and President Rouhani expressed appreciation for such Japanese assistance.
In addition, Prime Minister Abe stated that Japan intends to strengthen bilateral relations in cultural, people-to-people, and sports exchanges, and the two leaders shared the view on steadily maintaining and deepening their historically friendly relationship.

Discussion was also held on the Joint Comprehensive Plan of Action (JCPOA). Prime Minister Abe stated that Japan has consistently supported the JCPOA, appreciated Iran’s continuous cooperation with the International Atomic Energy Agency (IAEA), and noted that Japan expects Iran to continue to implement the JCPOA. Furthermore, Prime Minister Abe requested Iran, as a major power in the region, to fulfill a constructive role for the stabilization of the Middle East. In response, President Rouhani expressed appreciation for Japan’s consistent support of the JCPOA. President Rouhani noted that Iran does not seek to revoke the JCPOA and that Iran prohibits nuclear weapons and is not pursuing them.

The dinner was held in a friendly atmosphere. Both sides frankly exchanged views regarding a range of areas of the bilateral relationship.