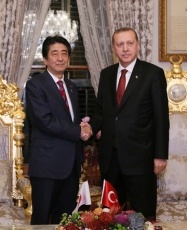 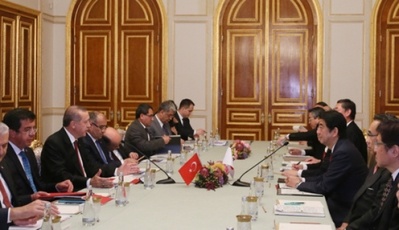 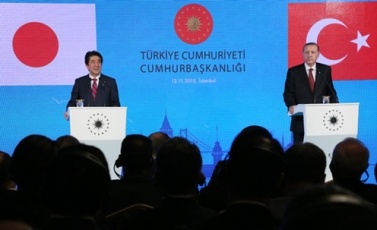 Photo: Cabinet Public Relations Office
On Friday, November 13, commencing at shortly after 5 p.m. (shortly after 12 a.m. on November 14, Japan time) for approximately one hour and 30 minutes, Mr. Shinzo Abe, Prime Minister of Japan, held a summit meeting with H.E. Mr. Recep Tayyip Erdoğan, President of the Republic of Turkey, at the President’s Office (Yıldız Palace), during his visit to Istanbul. The overview is as follows.

At the beginning, a small-group meeting was held for approximately 50 minutes.

(a) President Erdogan stated the following:

(d) Additionally, the two leaders discussed regional issues such as the situations in Syria and Iraq.

Following the above meeting, an expanded meeting took place for approximately 40 minutes.

(c) The two leaders discussed the large number of refugees flowing into Turkey, and the sharing of responsibilities by the international community.