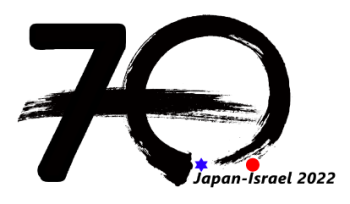 This logo expresses our desire to further advance toward the future the bilateral relations, which have been dramatically flourishing in recent years based on the ties of a 70-year friendship.

This official logo of "the 70th Anniversary of the Establishment of Diplomatic Relationship between Japan and the State of Israel in 2022" may be used for those events related to this anniversary upon approval. More information about the application procedures will be available on the websites of the Ministry of Foreign Affairs, Embassy of Japan in Israel and Embassy of Israel in Tokyo in due course.