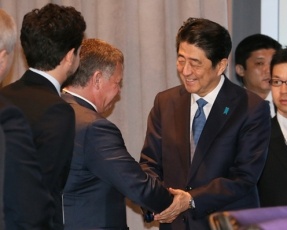 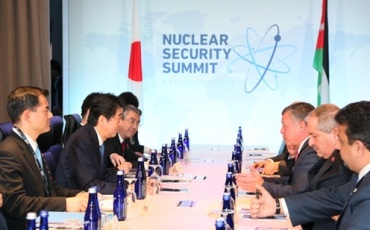 Photo: Cabinet Public Relations Office
On Friday, April 1, commencing from 12:06 pm (local time) for approximately 30 minutes, Mr. Shinzo Abe, Prime Minister of Japan, held a meeting with His Majesty King Abdullah II Ibn Al Hussein, King of the Hashemite Kingdom of Jordan, in the United States, during his visit to attend the Nuclear Security Summit. The overview of the meeting is as follows.

At the beginning, King Abdullah welcomed the opportunity to meet again, expressed his gratitude for Japan's excellent assistance, and mentioned the productive consultations between the two countries in a variety of fields. In response, Prime Minister Abe expressed Japan's steadfast support for Jordan's efforts to uphold stability in the Middle East amid difficult circumstances, including the crisis in Syria, the refugee issue, and the ISIL. In addition, the two leaders agreed to further enhance cooperation in a wide range of fields.

In response, King Abdullah once again expressed his gratitude for Japan's unwavering assistance, including the water-related aid mentioned by Prime Minister Abe.

The two leaders exchanged their opinions on the current state of the Middle East and North Africa, including Syria and the Middle East Peace Process, and agreed to continue the close cooperation between Japan and Jordan.