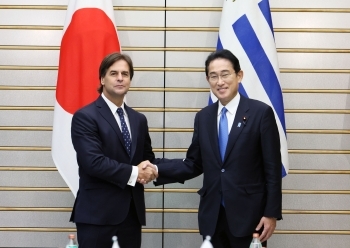 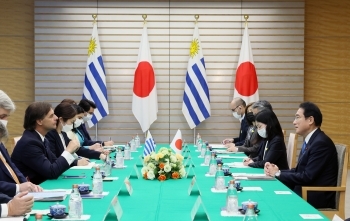 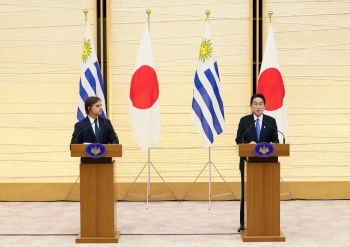 On October 28, commencing at 11:40 a.m., for approximately 40 minutes, Prime Minister KISHIDA Fumio held a Japan-Uruguay Summit Meeting with H.E. Mr. Luis Lacalle Pou, President of the Oriental Republic of Uruguay, who was on an official working visit to Japan. Following a joint press announcement, the two leaders held a working lunch from 12:45 p.m., approximately for 45 minutes. The overview of the meeting is as follows.
The two leaders also issued the Japan-Uruguay Joint Statement.

The two leaders acknowledged that both countries have great economic potential and decided to establish the Joint Committee between the two governments to discuss mainly bilateral economic relations. They also welcomed recent developments such as the entry into force of the Customs Mutual Assistance Agreement and the Tax Convention between the two countries, and shared their views on the promotion of public-private cooperation in the digital sector. Furthermore, they welcomed the introduction of the working holiday program, which will contribute to the exchange of the youth of the two countries.