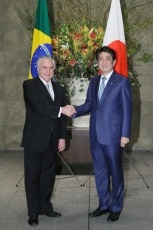 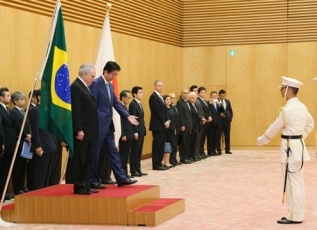 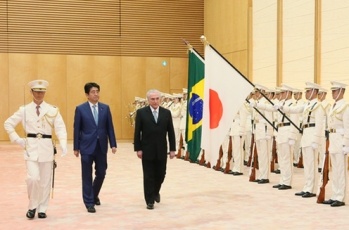 On October 19, commencing at 3:27 p.m. for approximately 50 minutes, H.E. Mr. Shinzo Abe, Prime Minister of Japan, held a Japan-Brazil Summit Meeting at the Prime Minister’s Office with H.E. Mr. Michel Miguel Elias Temer Lulia, President of the Federative Republic of Brazil, who was making an official working visit to Japan. The overview is as follows. Mr. Kotaro Nogami, Deputy Chief Cabinet Secretary, among others, attended the meeting. 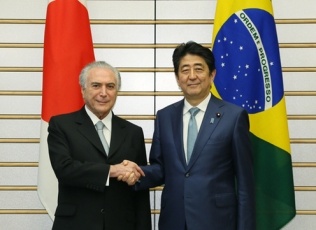 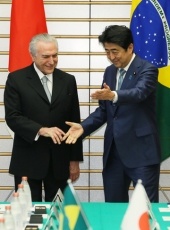 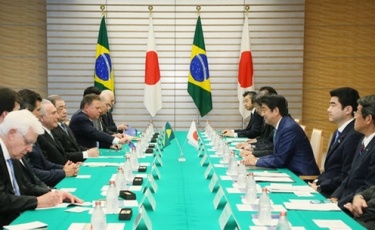 (1) At the beginning, Prime Minister Abe conveyed his congratulation to President Temer for the success of the recent Rio 2016 Olympic Games. The Prime Minister stated that Japan attaches importance to its relationship with Brazil as an important partner with which it shares fundamental values such as liberty, democracy, human rights and the rule of law, and with which it also cooperates in international fora. The Prime Minister also expressed his hope that President Temer’s visit to Japan will provide an opportunity to significantly advance the bilateral relations. In response, President Temer expressed his gratitude for Prime Minister Abe’s attendance at the closing ceremony for the Rio Olympics. President Temer explained that, following the establishment of his new administration, he visited Japan as one of his top priority countries, and he expressed his expectation toward the development of the bilateral relations.

(2) With regard to bilateral relations, Prime Minister Abe stated that he supports the regulatory reform, infrastructure development and enhanced competitiveness that the Temer Administration advocates. The Prime Minister also expressed his expectation towards the advancement of free and open economic policies, as well as his intention to pursue cooperation by utilizing the infrastructure development consultations that the two countries recently decided to establish. President Temer replied that Brazil has become a new country, and along with emphasizing Brazil’s stability on the political and judicial fronts, he expressed his strong expectations of increased investment in Brazil by Japanese companies.

(3) With regard to cooperation in international fora, Prime Minister Abe and President Temer confirmed that, as members of the G4, Japan and Brazil will continue collaborating in their efforts to realize United Nations Security Council (UNSC) reform. Prime Minister Abe also explained Japan’s policy of “Proactive Contribution to Peace” based on the principle of international cooperation, and the “Legislation for Peace and Security” as its concrete practice of the policy, and he stated that Japan will contribute even more proactively to the peace, stability and prosperity of the region and international community.

(4) Also, Prime Minister Abe mentioned the importance of ensuring freedom of navigation and respecting the rule of law at sea, including the East China Sea and the South China Sea. Furthermore, Prime Minister Abe stated that the international community should respond more resolutely than in the past to the new level of threat posed by North Korea, and that he hopes to coordinate towards the adoption of a UNSC resolution, with new sanctions. Prime Minister Abe also called for understanding and cooperation towards resolving the abductions issue immediately. 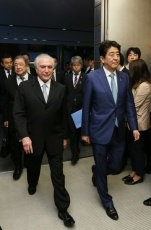 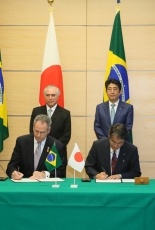 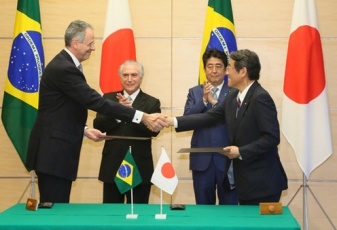 (Photo: Cabinet Public Relations Office)
Following the Summit Meeting, the Memorandum of Cooperation between the Government of Japan and the Government of the Federative Republic of Brazil for the Promotion of Investments and Economic Cooperation in the Infrastructure Sector (English (PDF)

) was signed and exchanged in the presence of the two leaders. 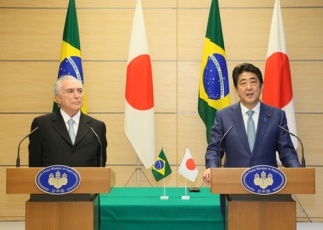 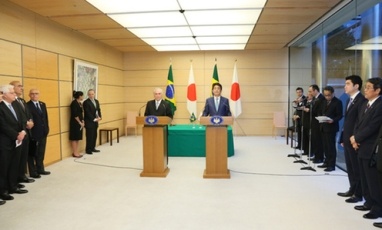