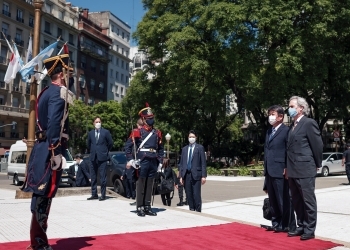 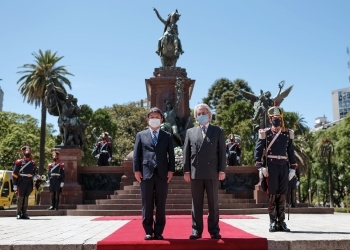 On January 7, commencing at 11:50 a.m. local time (11:50 p.m. on January 7 Japan time) for approximately 45 minutes, Mr. MOTEGI Toshimitsu, Minister for Foreign Affairs of Japan, who is currently visiting Argentina, paid a courtesy call on H.E. Mr. Alberto Fernández, President of the Argentine Republic. Following this, at 1:00 p.m. (1:00 a.m. on January 8 Japan time), he held a meeting with H.E. Mr. Felipe Carlos Solá, Minister of Foreign Affairs, International Trade and Worship of the Argentine Republic, for approximately two hours and ten minutes. Additionally, prior to the courtesy call and meeting, at 10:30 a.m. on the same day, (10:30 p.m. on January 7 Japan time), he held an informal meeting with representatives of the Nikkei (Argentines of Japanese descent) community for approximately 20 minutes. The overview of each meeting is as follows.

Minister Motegi described Argentina as a strategic partner in many respects, including shared fundamental values, cooperation in international forums such as the G20, the development of trade and investment relations, and traditional ties nurtured via Nikkeis among others. He affirmed that during this visit, he would continue to work with the new administration, which has been pursuing a new set of policies since its inauguration in December 2019, to maintain and strengthen a free and open international order based on the rule of law, and to develop bilateral relations in a variety of areas, including the economy.

1 Courtesy call to President Fernández (with Santiago Cafiero, Chief of the Cabinet of the Ministers, Felipe Solá, Foreign Minister, and Guillermo Hunt, Ambassador Designate to Japan in attendance) 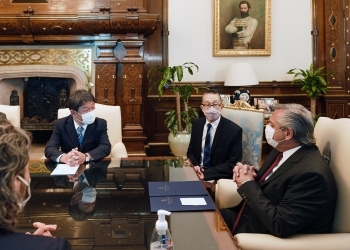 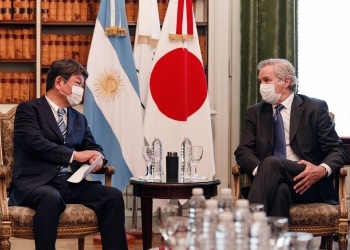 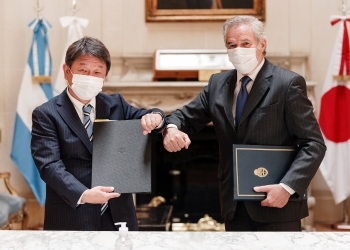