Meeting between Mrs. Akie Abe, spouse of the Prime Minister of Japan, and Mrs. Juliana de Macri, First Lady of the Argentine Republic 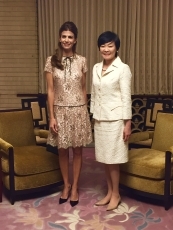 On May 19, Mrs. Akie Abe, spouse of the Prime Minister of Japan, held a meeting with Mrs. Juliana de Macri, First Lady of the Argentine Republic, who was paying an Official Visit to Japan.

Mrs. Abe conveyed her pleasure of welcoming Mrs. Macri to Japan and mentioned that she had a worthwhile and unforgettable visit to Argentina in November last year including the visit to the Japanese Garden. Mrs. Macri responded with her appreciation for the invitation of this visit to Japan.

Mrs. Macri expressed her respect for the Japanese culture and Japanese sense of value and she also mentioned that she was very pleased to have spent a worthwhile time in Japan with her daughter who accompanied her. Additionally she highly evaluated the design and the quality of Japanese clothing from the point of view as an entrepreneur of apparel brand.

Mrs. Abe and Mrs. Macri exchanged views on their common interests such as the beauty of nature. Mrs. Macri mentioned that she would like to see rice field with her daughter during their next visit to Japan. The meeting took place in a friendly atmosphere.

In addition, Mrs. Abe and Mrs. Macri participated in an ikebana workshop which was followed by a meeting. After having experienced aspects of Japanese traditional culture, they both made creative pieces of ikebana art.