1 Courtesy Call to the President of the Republic of Panama 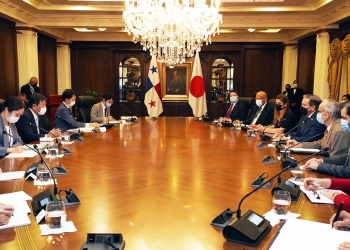 On July 17, commencing at 3 p.m. (local time; on July 18, 5 a.m. JST) for about 40 minutes, Mr. MOTEGI Toshimitsu, Minister for Foreign Affairs of Japan, who is visiting the Republic of Panama, paid a courtesy call on H.E. Dr. Laurentino Cortizo, President of the Republic of Panama. The overview of the meeting is as follows.

（1）At the outset, Minister Motegi touched upon their shared fundamental values, the long friendship between Japan and Panama, and that Japan is a major user of the Panama Canal. Minister Motegi also expressed his hope to deepen cooperation between the two countries to maintain a bilateral relationship as well as an international order based on the rule of law. In response, President Cortizo welcomed Minister Motegi’s visit to Panama, referred to his visit to Japan in 2019 to attend the Ceremony of Enthronement and expressed his hope to continue strengthening the historical Japan-Panama relationship.

（2）Minister Motegi stated that he hoped to make the Tokyo Olympics and Paralympics a safe and secure event and use it as an opportunity to deepen global ties as the world fights to overcome COVID-19. President Cortizo praised Japan’s preparations for the Tokyo Games under the leadership of Prime Minister Suga despite COVID-19.

（4）Minister Motegi stated that Japan has been providing medical equipment and other support to Panama in response to the coronavirus. Minister Motegi also stated that he would like to contribute to sustainable growth in Panama by developing quality infrastructure, referring to the yen loan for the Panama Metropolitan Area Urban Transportation Line-3 Development Project. President Cortizo responded by conveying his gratitude for Japan’s support and expressed his expectation for increased investment from Japanese enterprises. Both sides shared the view to promote the economic relations between Japan and Panama. President Cortizo noted that he would like to dispatch a public-private joint mission to Japan next year.

（5） Minister Motegi introduced Japan’s efforts to achieve a “Free and Open Indo-Pacific (FOIP).” The Minister and the President recognized the importance of an international order based on the rule of law. Both sides also exchanged views on regional situation in East Asia, including North Korea and the East and South China Seas. They also discussed cooperation in the international arena.

2 Visit to the Panama Canal 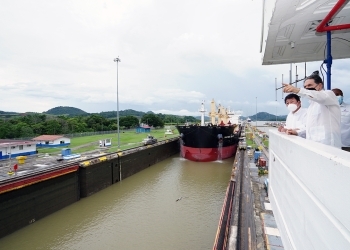 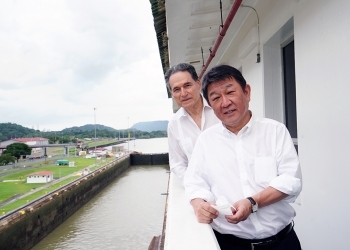 On July 17, commencing at 4 p.m. (local time; on July 18, 6 a.m. JST) for about 30 minutes, Minister Motegi visited the Panama Canal, where he received an overview of canal operations from Dr. Arístides ROYO Sánchez, Minister of Canal Affairs and former President of the Republic of Panama.

［Reference］Panama Canal
The Panama Canal, which connects the Pacific and the Atlantic Oceans, opened in 1914 and expanded in 2016. It is eighty kilometers long. Approximately 14.1% (Panama fiscal year 2020) of the cargo passing through the Panama Canal is transiting to or from Japan. Japan has made several contributions to the development of the Canal: A Japanese engineer was engaged in the construction of the canal before its opening, and towing vehicles made in Japan have been used in the canal.