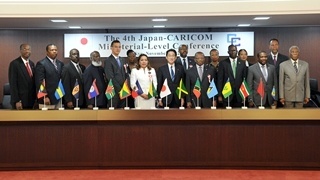 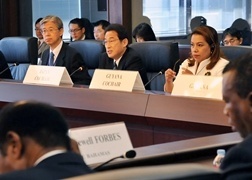 Foreign ministers and other officials(see reference) from the Caribbean Community (CARICOM) member states, which comprise 14 countries in the Caribbean region, were invited to Tokyo on November 14 and 15 to participate in the Fourth Japan-CARICOM Ministerial-Level Conference. An overview and evaluation of the Conference are as follows.

On Saturday, November 15, Foreign Minister Kishida co-chaired the Fourth Japan-CARICOM Ministerial-Level Conference with foreign ministers and other officials from CARICOM member states, which comprise 14 countries in the Caribbean region. An overview of the Conference is as follows.
The participating countries held discussions in line with the three pillars of Japan’s CARICOM policies announced by Prime Minister Shinzo Abe at the first Japan-CARICOM Summit Meeting in July this year. Following the Conference, the Japan-CARICOM Joint Ministerial Statement [PDF]

a) First Pillar: ”Cooperation towards sustainable development, including overcoming the vulnerabilities particular to Small Island Developing States”
Minister Kishida stated that as a result of considering the importance of assistance not based solely on GDP per capita, a point in which the CARICOM side expressed strong interest at the past Ministerial-Level Conference in September, Prime Minister Abe announced at the Japan-CARICOM Summit Meeting in July this year that Japan would conduct field surveys on future cooperation. Minister Kishida explained that as a result, surveys have been carried out in the areas of renewable energy and energy conservation since the end of August this year, and that a survey in the field of disaster risk reduction is also scheduled to be carried out soon. Minister Kishida also mentioned that Japan will consider concrete cooperation based on the results of these surveys.
In response, the CARICOM member states expressed their appreciation for the strengthening of the relationship between Japan and CARICOM, and the broad array of assistance being extended by Japan, along with stating that this Ministerial-Level Conference is an expression of both sides’ strong interest in strengthening cooperation. They also expressed gratitude and expectations over Japan’s serious consideration of CARICOM’s long-standing concerns and the concrete progress that is being made in this regard.
b) Second Pillar: Deepening and expanding bonds founded on exchanges and friendship
Both sides shared the view that they will explore the possibility of utilizing international conferences as an opportunity to hold Ministerial-Level Conferences frequently.
Both sides appreciated the progress made through exchanges during the Japan-CARICOM Friendship Year, and confirmed that they will continue mutual visits by government officials, the promotion of exchanges between members of parliament, exchanges via the Japan-CARICOM Young Diplomats Invitation Program and the JET Program, the promotion of support for Japanese language education at the University of the West Indies, and the promotion of tourism between Japan and CARICOM.

(2) Third Pillar: Cooperation in addressing challenges of the international community

a) United Nations Security Council reform
Minister Kishida stated that he would like to continue to cooperate closely with CARICOM in order to achieve reforms in the Security Council, in view of the 70th anniversary of the founding of the UN next year. The CARICOM member states also stated that they attach importance to achieving Security Council reforms, and the view was shared that coordination will be strengthened with a view to converging their positions.
b) Climate change and Small Island Developing States (SIDS)
Minister Kishida stated that he would like to cooperate with CARICOM to reach an agreement on a new post-2020 international framework that is fair, effective and includes all countries, and also to address the issue of the vulnerabilities particular to SIDS. Minister Kishida also mentioned that Japan announced its support to by training for 5,000 personnel, based on the standpoint that human resources development is important in all fields, and also intends to make an adequate contribution to the Green Climate Fund (GCF). The CARICOM member states provided a detailed explanation of rising sea levels and the serious impact of frequent natural disasters that are accompanying climate change, and noted that they would like to cooperate on addressing this problem, which requires urgent attention. The CARICOM side also expressed gratitude for Japan’s deep understanding and interest in problems that are particular to SIDS, and close cooperation was confirmed.
c) Post-2015 development agenda
Minister Kishida stated that the post-2015 development agenda should be based on the principle of human security, an effective framework to addressing challenges including gender equality, health, and disaster risk reduction, and emphasized the importance of taking the vulnerabilities particular to SIDS into consideration. Minister Kishida noted that he intends to cooperate closely to formulate a framework that is feasible to implement. Minister Kishida also noted that he hopes to obtain participation at the Third UN World Conference on Disaster Risk Reduction in Sendai City in March next year. The CARICOM member states emphasized the development problems that are a consequence of small-scale economies, and expressed their wish that Japan participate in the debate given its utmost consideration to CARICOM’s viewpoint.
Minister Kishida stated that he hopes to obtain CARICOM’s participation at the Third UN World Conference on Disaster Risk Reduction that will be held in Sendai City in March next year. The CARICOM side confirmed proactive participation in the Conference and close cooperation.
d) Financing for development
The CARICOM member states explained the development challenges particular to small island developing states, such as frequent natural disasters accompanying climate change, the significant lost of infrastructure development borne by the people due to the small scale of their economies, and their fiscal deficits resulting from their vulnerability to external influences. They explained that the reconstruction cost from natural disasters, CARICOM countries require significant concessional funding but are unable to access them due to the income-level restriction, and since CARICOM still has substantial development needs, they suggested that they would like Japan to understand CARICOM’s position and speak for CARICOM in the international community. Minister Kishida noted that Japan will give utmost consideration to the concerns of CARICOM.
e) Sustainable use of marine living resources
Minister Kishida stated that as a responsible fisheries nation Japan would like to strengthen cooperation on the sustainable use of marine living resources, including Cetaceans. The CARICOM member states stated that they share Japan’s standpoint, and would like to cooperate on sustainable fishery industries, sustainable use of marine resources overall, and preserving marine order.

(Open a New Window)
Page Top
Back to Japan-CARICOM Relations