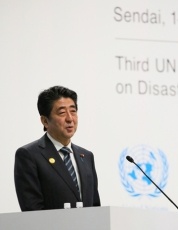 Four years have passed since the occurrence of the Great East Japan Earthquake, which caused unprecedented damage. I am honored to host the Third UN World Conference on Disaster Risk Reduction here in Sendai, which is showing signs of vigorous reconstruction from the disaster, with the cooperation of the UN and national governments.

I have visited the disaster-affected areas almost every month since I assumed my position as Prime Minister. I have listened to the voices of the many local people who say, “We want to build a society that is resilient to disasters, and we want to build a hometown that is better than before the earthquake.”

Starting from this earnest wishes, Japan is working on the reconstruction from the Great East Japan Earthquake based on the idea of “Build Back Better,” which aims not simply to recover the same situation that existed prior to the disaster, but rather build a society that is more resilient to disasters than before.

We are working to build disaster-resilient communities, including through the relocation of residential quarters to safer areas, strengthening seawalls, the development of evacuation routes and evacuation buildings, and thorough disaster risk reduction education and training.

In the wake of the Great Hanshin-Awaji Earthquake 20 years ago, many lives were lost due to collapsed houses and fires. Japan worked on further strengthening the institutions on earthquake-resistance and seismic isolation based on the lessons learned from that event.

We are now working on further investment in disaster risk reduction based on the lessons learned from the Great East Japan Earthquake and the accident at the Fukushima Daiichi Nuclear Power Station.

It is necessary to take a thorough hands-on approach and collaborate with local governments, private companies, non-governmental organizations, research institutes, and the media to realize fine-tuned reconstruction in a way that takes into consideration the sensitivities of disaster victims. Furthermore, it is important to support the life of the people affected by the disaster in cooperation with the businesses and enterprises that generate local dynamism, and the non-profit organizations that support local communities.

Those who faced the most difficult circumstances in the wake of the Great East Japan Earthquake were women, children, the elderly and persons with disabilities. We address disaster risk reduction by paying attention to these people and with their active participation. We attach importance to this approach to disaster risk reduction based on the notion of human security.

Japan, as a country that has accumulated knowledge and technology for disaster risk reduction through experiencing numerous natural disasters, has promoted cooperation to reduce the number of disaster victims, as well as their suffering, as much as possible in the international community. To advance this contribution even more vigorously, I hereby announce the “Sendai Cooperation Initiative for Disaster Risk Reduction.”

For this purpose, in the coming four years, Japan will provide cooperation amounting to 4 billion US dollars. And Japan will train 40 thousand government officials and local leaders to play a leading role in national efforts for disaster risk reduction and post-disaster “Build Back Better.”

I would like to renew my appreciation for the assistance extended from all over the world since the occurrence of the Great East Japan Earthquake four years ago. Thanks to this assistance also, reconstruction is making a rapid progress. I hope you will take this opportunity to witness the vigorous reconstruction of Tohoku.