Top > Foreign Policy > Global Issues & ODA > Health and Medical Care > Statement by His Excellency, Mr. Shinzo Abe Prime Minister of Japan “World Leaders for Universal Health Coverage (UHC): A High-Level Discussion at the United Nations on Achieving the SDGs through Health for All” At the Side Event to the 72nd Session of the United Nations General Assembly

Statement by His Excellency, Mr. Shinzo Abe
Prime Minister of Japan
“World Leaders for Universal Health Coverage (UHC):
A High-Level Discussion at the United Nations on
Achieving the SDGs through Health for All”
At the Side Event to the 72nd Session of the United Nations General Assembly 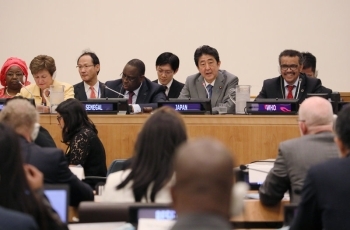 At the outset, I would like to express my deepest gratitude to you all for attending this event, “World Leaders for Universal Health Coverage (UHC): A High-Level Discussion at the United Nations on Achieving the SDGs through Health for All,” co-hosted by the Government of Japan.

While the progress of globalization has brought great benefits to humanity, we have also witnessed growing concern and discontent over widening disparities. Moreover, the international community is facing various threats to human security, such as climate change, terrorism, refugee issues, and infectious diseases. In this context, the promotion of health, especially Universal Health Coverage or UHC, is essential for addressing these challenges and achieving the core principle of the 2030 Agenda; that is, the realization of a society where “no one is left behind.”

International efforts to achieve UHC have made great progress. At the Sixth Tokyo International Conference on African Development (TICAD VI) held last year under the twin principles of African ownership and international partnership, we introduced “UHC in Africa”, a policy framework which presents a roadmap and actions for achieving UHC. In addition, we launched the “International Health Partnership for UHC 2030” platform, which facilitates coordination among various efforts for UHC.

However, our journey toward UHC has just begun. There are tremendous challenges ahead of us. It will be by no means an easy path to expand the number of skilled doctors, nurses and community health workers, establish pharmaceutical supply and management systems, and introduce financial systems that ensure affordable access to basic health for all.

In the past year, we have welcomed several new leaders to the global health landscape. With UN Secretary-General António Guterres, WHO Director-General Dr. Tedros Adhanom, and UNDP Administrator Achim Steiner, we have an unprecedented opportunity to remarkably expand the scope and quality of efforts toward UHC. I am counting on their strong leadership.

Since the G8 Kyushu-Okinawa Summit in 2000, global health has become a top agenda item to be discussed by global leaders. Last year, the Government of Japan set global health as a major pillar of both theG7 Ise-Shima Summit and TICAD VI last year, and has dedicated itself to the promotion of UHC. I would like to lead in-depth discussions on global health, making the most of future high-level meetings at the United Nations and TICAD VII to be held in Yokohama in 2019.

Meanwhile, UHC calls for cross-sectoral approaches. We need to pursue UHC in the context of social changes, such as the concentration of populations in urban areas and the aging of society, mainly seen in Asia. In this context, Japan formulated the “Asia Health and Wellbeing Initiative” last year, and is ready to share our experiences of UHC in an aging society with other Asian countries. In addition, sustainable and inclusive UHC requires significant resources. Therefore, I underscore the importance of a framework to mobilize resources to achieve UHC from the private sector and civil society, along with those from international organizations and donor countries, in order to complement the efforts of countries to mobilize public resources domestically.

In December of this year, Japan will host the “UHC Forum 2017” in Tokyo with other stakeholders, such as World Bank, WHO, UNICEF and UHC 2030. At the forum, I would like to have further discussions on measures to advance UHC pragmatically, building on today’s event.

In closing, our contribution to achieve UHC is an investment for the future, towards 2030 and beyond. I am firmly convinced that today’s event and the UHC Forum in December will provide a great opportunity to take concrete steps toward attaining UHC. I am looking forward to seeing all the leaders from various fields present here today, again in Tokyo.