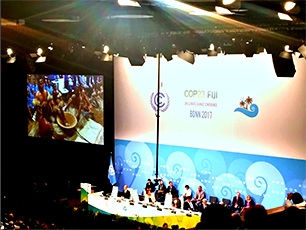 1. Overview of the conference

(1) The relevant implementation guidelines of the Paris Agreement

Japan put forward technical proposals on the relevant implementation guidelines of the Paris Agreement (hereinafter referred to as "the guidelines") including on nationally determined contributions (NDCs), transparency framework and market mechanisms. Some developing countries argued that implementation of the Paris Agreement should be differentiated between developed and developing countries and pushed for broadening the scope of the guidelines. Developed countries opposed to these arguments, and Japan emphasized that the guidelines should promote all countries' efforts on climate change and should not be bifurcated.
The outlines/elements of the guidelines were developed at this conference in order to accelerate the technical work towards adoption of the guidelines in 2018. The contents of each outline/element varied depending on the maturity of work under each agenda.

The consultations on the design of Facilitative Dialogue in 2018 (hereinafter "Talanoa Dialogue" [note]) were convened by Fiji, the COP Presidency. Japan supported Fiji's effort and contributed to the completion of its design at the COP23, aiming to design it as a forward-looking opportunity for communication or update of NDCs by 2020.

[note]
In Talanoa Dialogue, stocktaking of the collective progress on mitigation effort of Parties will be convened. "Talanoa" is a traditional approach used in Fiji and the Pacific to engage in an inclusive, participatory and transparent dialogue, which will be used for Facilitative Dialogue in 2018 by the COP Presidency's proposal.

Minister Nakagawa met with his counterparts including Canada, China, Fiji (COP23 Presidency), the United States and EU and stressed the needs to come together and send a strong message to the international society for combatting global warming.
Throughout the COP23, the Government of Japan set up Japan Pavilion, where it held some events to introduce and discuss the efforts on climate change taken by the Government and various institutions, organizations and researchers. The Japan Pavilion showcased Japan's contributions to climate change measures such as "Japan's Assistance Initiatives to address Climate Change Responding to Needs of the Developing Countries 2017" released on October 30th and the Roadmaps on innovative technologies released from Innovation for Cool Earth Forum (ICEF).

(4) Speech by Minister Nakagawa at the high-level segment

Minister Nakagawa stated that Japan would contribute to progress of the negotiation at the COP23 towards adoption of the relative guidelines of the Paris Agreement at the COP24 and support Fiji's effort in designing of Talanoa Dialogue. He also introduced the Japan's domestic and international actions as well as the assistance for the non-state actors' actions, and expressed intention to invite the 49th plenary session of the IPCC to Japan. Furthermore, Minister Nakagawa referred to the establishment of "Partnership to Strengthen Transparency for Co-Innovation" to enhance transparency of various actors' efforts addressing climate change and the provision of $500 million to the Capacity-Building Initiative for Transparency (CBIT) as part of the initiative, and promotion of climate actions by the launch of GHG Observing Satellite "IBUKI-2" (GOSAT-2).

Countries reaffirmed the continued progress of developed country Parties towards reaching the goal of jointly mobilizing USD 100 billion annually by 2020. Regarding the Adaptation Fund, the discussion took place towards the decision on the Adaptation Fund serving the Paris Agreement, subject to and consistent with decisions to be taken at CMA1-3 (December 2018). It was decided that the identification of the information to be provided by Parties in accordance with Article 9, paragraph 5, of the Paris Agreement would be taken over by the SBI (Subsidiary Body for Implementation) from 2018.

Japan held "the 5th JCM Partner Countries' Meeting" where representatives of 17 partner countries of the Joint Crediting Mechanism (JCM) gathered to welcome the progress of the JCM and share the view to support further formulation and implementation of JCM projects. Furthermore, Japan held a side event on "Ministerial Declaration on Carbon Markets" at the Japan Pavilion. Among the signatories of the declaration, Honarable Aupito William Sio, Minister for Pacific Peoples from New Zealand and Honarable Stéphane Dion, Ambassador and former Minister of Foreign Affairs from Canada participated in the event. Honarable Masagos Zulkifli, Minister for the Environment and Water Resources from Singapore also attended and expressed to join the declaration.

At the beginning of the conference, some developing countries proposed to address pre-2020 implementation and ambition. Japan promoted its steady implementation including actions towards achieving its GHG reduction target in 2020 and support to developing countries, and emphasized that advancing the practical actions is important. The decision on this matter includes convening stocktakes of all Parties' pre-2020 implementation and ambition in 2018 (COP24) and 2019 (COP25).
The COP/CMP decisions related to the following issues were also adopted: the Warsaw International Mechanism on loss and damage, gender and climate change, the local communities and indigenous peoples platform, and programme budget for the biennium 2018-2019. The decision towards the concrete work on agriculture was first adopted, taking into consideration the safeguarding food security.

The COP 24 will be convened in December 2018 in Katowice, Poland.

Japan participated in the COP23 with three main objectives: (i) furthering discussions on the guidelines of the Paris Agreement, (ii) completion of the design of Talanoa Dialogue and (iii) promoting Japan's contribution on climate change. The three objectives were largely achieved in various aspects of the outcomes of the conference. Japan supported Fiji, the COP23 Presidency, on both negotiation and promotion of global climate actions.
It should be noted, however, that some developing countries pushed for reopening the Paris Agreement. They maintained their pre-Paris positions that only developed countries were required to take actions, taking advantage of the ambiguous interpretations of the Paris Agreement, and also argued to treat all agenda equally on the time allocation and the format of outcome of the session. Since there are clear differences between views of developed and developing countries, the challenge will remain in finding a way to develop the guidelines constructively while maintaining the mandate of the Paris Agreement.