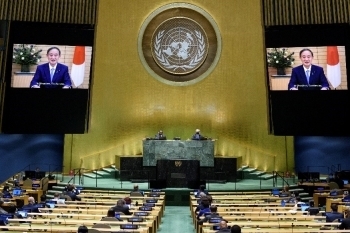 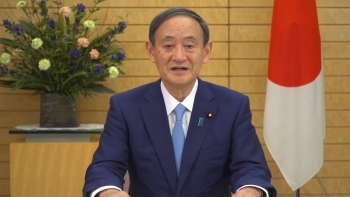 1 On September 25 (New York time), Mr. SUGA Yoshihide, Prime Minister of Japan, delivered his statement at the General Debate of the 75th session of the United Nations General Assembly.

It is an honor for me to deliver my first statement after assuming office on 16 September as Prime Minister of Japan, at the United Nations which is celebrating its 75th anniversary.

The novel coronavirus disease has pulled us into an unprecedented crisis, which in turn has brought the international community back to cooperation from its tendencies towards division and isolation. For the last 75 years, multilateralism has become stronger and made progress in the face of multiple challenges. I call on all of you to unite in solidarity so we can turn the current crisis into an opportunity to reinforce our cooperation.

In our fight against the virus, Japan has been doing its utmost for the health and safety of the people of Japan and around the world, harnessing the wisdom of public and private sectors alike. Now we are at the stage of revitalizing socio-economic activities while maintaining measures for preventing the spread of infections. Let me share my thoughts with you based on Japan’s experiences.

The spread of the coronavirus is a human security crisis, posing a threat to the lives, livelihoods and dignity of people across the globe. The guiding principle for us to overcome this crisis must be “leave no one behind.” The concept of human security, which focuses on individuals, has been debated for many years at this very forum of the United Nations General Assembly.

As we face the current crisis, and guided by the principle of human security, I think it is essential to set the goal of “leaving no one’s health behind” as we work towards achieving universal health coverage. I expect this to be our shared goal. On that basis, Japan will proactively lead international efforts with a focus on the following three perspectives in collaboration with other countries.

First, we need to safeguard lives from the novel coronavirus diseases. Japan fully supports the development of therapeutics, vaccines and diagnostics, and works towards ensuring fair and equitable access for all, including those in developing countries. Japan also works with international organizations so that relevant international frameworks will be able to deliver results. We are also proposing a framework of “patent pooling”. Public-private partnership is essential particularly in the health sector, and Japan is going to promote it steadfastly.

Second, we must prepare ourselves for future health crises. Japan is committed to expanding its efforts in developing countries to build hospitals as well as to assist strengthening health and medical systems through providing equipment and supporting human resource development. Working with the ASEAN, Japan is supporting the establishment of an ASEAN Centre for public health emergencies and emerging diseases. Japan has also been supporting the Africa Centres for Disease Control and Prevention. As a matter of fact, in Africa, we are witnessing the concrete result of our longstanding cooperation through the TICAD process for human resource development as well as for provision and maintenance of facilities in the health sector. Japan has provided support for the establishment of the Noguchi Memorial Institute for Medical Research in Ghana and assisted in the training of its medical laboratory technologists. The Institute serves as the hub of the country’s response to the coronavirus and processes up to about 80% of PCR tests carried out in the country.

Third, we will take measures to ensure health security in an even broader context. We will continue to work with other countries to improve the conditions of water, sanitation and hygiene, nutrition and other environmental factors. In response to the current crisis, Japan has provided foreign aid of over 170 billion Japanese Yen or 1.54 billion USD to medical and health sectors.

Along with these initiatives, it is critically important to take steps towards revitalizing the economies hit hard by the crisis. To bolster economic activities in developing countries, Japan is implementing the COVID-19 Crisis Response Emergency Support Loan of up to 500 billion Japanese Yen or 4.5 billion USD over the course of two years. Reviving the economy rests on the safe movement of people. We will make our utmost efforts to ensure universal distribution of vaccines and therapeutics. Free trade should not stop even with the restrictions caused by the crisis. We continue to promote WTO reform and economic partnership agreements with other countries. Times of difficulty are in fact times of innovation. Japan, for its part, will work on digitalization as a matter of urgency.

Now we must look to the human security concept of the new era in responding to various challenges, accelerating efforts to achieve SDGs and to tackle global issues. To this end, I propose that we tap into the wisdom from around the world to deepen our discussions.

Looking forward, we need to “build back better” from the COVID-19 pandemic and create a flexible yet resilient society where the SDGs have been achieved and a virtuous cycle of environment and growth is generated. The ongoing crisis is heavily impacting the education of children and the youth who shape the future. It is also affecting women among others. In order to create a better and more inclusive society, there are three points that I consider to be of paramount importance.

The first is the significance of the United Nations and multilateralism. The UN should be a forum where all stakeholders engage constructively to respond to crises and work together with transparency. While I greatly respect the activities and efforts of the UN thus far, I would also like to emphasize that the Organization is in need of neutral and fair governance more than ever. The WHO is key in our collective response to infectious diseases. Through its review and reform, I believe the WHO will be able to make even better use of necessary expertise at the right time, in the right manner. With this conviction, Japan stands ready to cooperate in the review and reform process. Likewise, UN reform, including the reform of the Security Council to reflect the realities of the 21st century, is an urgent task as the UN marks its 75th anniversary.

Second, I am convinced that the current crisis must not jeopardize international peace and security. UN engagement in peacekeeping operations and peacebuilding remains vital. Based on the policy of “Proactive Contribution to Peace”, Japan will continue to contribute to sustaining peace, drawing on its experiences, including through our role in the Peacebuilding Commission, and engaging in strengthening institutions and building capacities. We also remain committed to the capacity building of peacekeeping personnel in collaboration with African and Asian countries.

Third, we must not allow challenges against the rule of law in times of increasing uncertainties. The rule of law as we ourselves set forth in the SDGs is the foundation of order, both domestic and international, and the very spirit which the UN is built on. In March next year, using virtual platforms, we will host the 14th United Nations Congress on Crime Prevention and Criminal Justice in Kyoto with the aim of advancing the rule of law. Japan continues to promote a Free and Open Indo-Pacific, the foundation of regional peace and prosperity rooted in the global rule of law.

The issue of abductions by North Korea is a matter of serious concern for the international community. I myself have worked on this issue for many years. This year, two parents of the victims passed away. It is heartbreaking to imagine the pain of the family members who passed, after working so hard to rescue their dearest children and yet not achieving a reunion in the end. As the families of the victims continue to age, there is no time to lose before we resolve the abductions issue. Japan’s position remains unchanged. Japan seeks to normalize its relationship with North Korea, in accordance with the Japan-DPRK Pyongyang Declaration, through comprehensively resolving the outstanding issues of concern such as the abductions, nuclear and missile issues, as well as settlement of the unfortunate past. As the new Prime Minister of Japan, I am ready to meet with Chairman Kim Jong-un without any conditions. Establishing a constructive relationship between Japan and North Korea will not only serve the interests of both sides but will also greatly contribute to regional peace and stability. I will miss no opportunity to take actions with all my dedication.

This year marks the 75th anniversary since the first use of nuclear weapons. Hiroshima and Nagasaki must never be repeated. With this resolve, Japan will spare no effort in realizing a world free of nuclear weapons while firmly upholding the Three Non-Nuclear Principles. This year also marks the 50th anniversary of the entry into force of the Treaty on the Non-Proliferation of Nuclear Weapons (NPT), which serves as the cornerstone of the international regime for nuclear disarmament and non-proliferation. I wish to emphasize once again the importance of maintaining and strengthening the Treaty. We, as the international community, need to stand united to work on arms control and disarmament of conventional weapons, or “Disarmament that Saves Lives.”

In the summer of next year, Japan is determined to host the Tokyo Olympic and Paralympic Games as proof that humanity has defeated the pandemic. I will continue to spare no effort in order to welcome you to Games that are safe and secure.

I thank you for your attention.