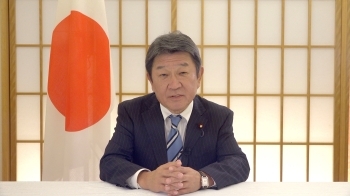 2 The statement by Mr. MOTEGI Toshimitsu

, Minister for Foreign Affairs of Japan, for this meeting is as follows.
This meeting was suspended after streaming nearly 60% of all statements. Foreign Minister Motegi’s statement will be streamed when the meeting is resumed.

Seventy-five years have passed since the founding of the United Nations. The world has changed dramatically. Crises we have to cope with, through multilateralism, are expanding in diversity and scale. COVID-19 is a case in point. The crucial role of the UN to unite the international community has never been more necessary.

We, the Member States, cannot be complacent with the status quo. Rather, we need to take serious steps, in close coordination with the UN organizations, to reform the UN for the post-COVID era. Secretary-General Guterres has been leading the effort to make the UN even more effective. Japan wants to see such reform make further headway this year. In this regard, the reform of the UN development system is critical to make sure that the most vulnerable will not be left behind.

For a stronger UN, Security Council reform cannot wait any longer. I regret to say that, today, the system designed seventy-five years ago does not fully deliver on the purposes of the Charter. I’m convinced that Member States having the capacity and willingness to take on major responsibilities should hold seats on an expanded Security Council. Only then will the Council be revived as an effective and representative organ. Japan is fully prepared to fulfill such responsibilities as a permanent member of the Security Council and contribute to ensuring peace and stability of the world. In the Declaration of this High-Level Meeting, we commit ourselves to instilling new life in the discussions on the Council reform. To fulfill that commitment and take a step forward, I call on all Member States to launch text-based negotiations.

This year also marks the seventy-fifth anniversary of the atomic bombings of Hiroshima and Nagasaki. We have to keep in mind that the UN was founded “to save succeeding generations from the scourge of war.” Japan spares no effort to achieve this goal into the future. The Future We Want. Let us build it together.